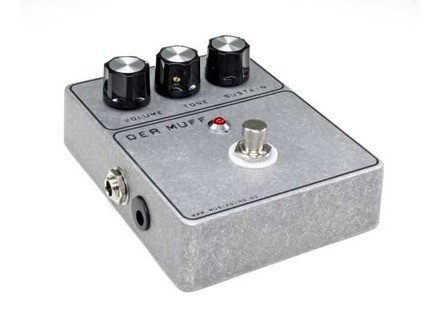 Das Musikding Der Muff - Distortion Kit
5
Distortion pedal, a replica of the Big Muff Pi.
The original Big Muff is labeled "Fuzz", but in MusikDing the Der Muff is the radius Disto .....??!

As in the original, 3 knobs:


What to say ... except that it is a very good distortion pedal with 2 transistors, at least for my taste

very
Good quality components (better than the original), not very complicated to assemble if you are a little handy, and poorly equipped.

Level sound is hard to describe, but which could compare with the real EH Big Muff (which I have), I would say they are a bit like "identical twins" because, although very similar, they are significantly different, however, and I have a clear preference for one of MusikDing. Best grain. More authentic.
Also generates MusikDing (slightly) less noise.
Setting the Sustain is better balanced, more linear stroke knob.

So, I installed for a friend, so I've kept the time to do some tests. But she totally convinced me and I'd love to take one.

For a little less than 45 € with shipping (again to be a little handy and equipped), this is a great deal.