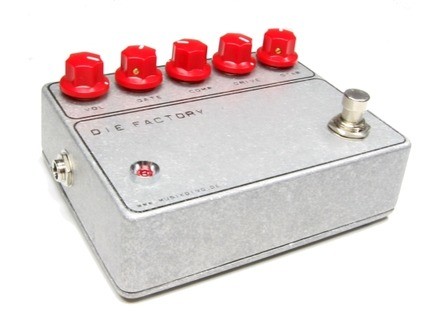 props's review (This content has been automatically translated from French)" a good clone ... defects including"

Das Musikding The Factory - Germanium Fuzz kit
4
Clone of the ZVex Fuzz Factory.
The big advantage of such a clone is that the modder can without fear of ruining a pedal to 300 euros. So I, for my first version (there is a second in preparation), mounted several components on sockets rather than soldering directly. Here are the mods that caught my sound preference:
- C1: 22μF instead of 10 => less treble
- C2: 2.2μF instead of 1 => the mids back
- C4: 47 instead of 10 uF => more bass
- Q1: AC176 (hfe = 80) instead of 2N3904 => to 100% germanium sound!
- Q2: AC128 (hfe = 80)
- Q3: AC128 (hfe = 110).
Finally, adding a 500 Ohm resistor between the +9 V power supply (that is to say mass) and the output jack to reduce the level of noise due to the power supply.
Grow these mods sound, make it less garish and more musical classic fuzz, while keeping the side barge extreme settings.
My second version, meanwhile, will these mods but silicon transistors.

Research sounds on this machine is completely improbable at first, but once you understand the principle of interactions between controls, we finally get something nice.

Sound side, it is served, it was the heavy, very saturated and overheated, self oscillation at all frequencies of the sound spectrum, crackle, sound way hash of 8 bits, then the highlight of the show: capture the radio (the BBC at me). In short, everything that makes the fuzz factory original.
Roughly, the initial sound before the mods was very loud, with lots of wind and noise in certain settings. Not really ideal, then they are people who love ... After changing the condos in and out, it's much better. But to have a more classic fuzz sound, I much prefer my fuzz 69 also in Musikding. Also note that the wah wah pedal input is ... massacred (although it is sublime with 69).

For the price, this clone is unbeatable. It has almost all the qualities, but also the shortcomings of the original.
Mounting side, no worries for me, everything worked the first time. This was my third DIY project, I start soldering now quickly and cleanly.
Some caveats: the case supplied with the Factory is very basic, the screws do not come back to it and the rest of the jet between the lid and the box. Ditto the stock transistors Musikding is not of high quality. Do not hesitate to buy from other stores and try other values.
Question decoration: there is less my thing, I tried the decal paper, a horror! I struggled with 100 times less transparent sticker paper Canson and the result is more than adequate.

Two words then click Customer Service Musikding, copy for myself (I even got a second kit Factory price reduced due to some logistical boondoggles).

Das Musikding The Factory - Germanium Fuzz kit
5
Fuzz / Fuzz / Fuzz. Full of fuzz at the ground, with or without self-oscillation and larsens.

Unbeatable value for money: less than € 30 components, plus an aluminum box to drill, and a small evening soldering iron ... for original pedal worth between 150 (ASAT Vexter.) and 250 € (USA)!

When you see the number of components inside, we say it is faster than price to pay for an original. However, I have not had the opportunity to compare Musikdings components with original ones.

Details have been given below, some additional remarks:

Comp and Gate knobs should, in my opinion, be settled together and last because they are interdependent:

Gate eliminates the noise inherent in certain settings, and the comp can go from a classic fuzz sound much chemical from the moment the gate is used.

Finally it is the knobs on which I play the most.

The list of hundreds of presets available on the web is in my opinion a waste of time, as trust his ears and adjust the volume to a quarter, then stab Drive, Gate and Comp, then repeat.

Highly effective, original, do not leave indifferent.
This little screaming my G & L ASAT as ever!

Sounds better in my opinion with a compressor input.

And then with a filter and / or phaser behind, welcome to the space!

Excellent, I would have been perfect if the input volume knob was present. I added it after, cf. tip on this pedal.
Next addition: a knob of Tone?

Anonymous 's review (This content has been automatically translated from French)" She lives her life ... not ask your opinion!"

Das Musikding The Factory - Germanium Fuzz kit
3
16/08/2012:
Fuzz pedal, the fuzzy madness (and vice versa ... I do not know anymore). DIY kit, so for fun principle in terms of expertise and customization.
Nothing but analog, which lacks connectivity to a PC to get to keep if only one of its use to another: palmface:
The material proposed here is serious and robust, clear and easy to implement.
7/10

16/08/2012:
Simple config? .... MDR! There is, I do not know on which site, the "presets" to refer to the layman proposed in this jungle of interactive settings, but to spend hours trying to get out of the said proposals and reaching out something just decent, politically correct ... Ah yes, but it's true, that says fuzz necessarily politically incorrect words (except my Big Muff from 1978, but I'm not going to return the knife in the wound, or when my last Angry Fuzz from Visual Sound).
4/10 for unmanageable side effect, sought by many ... but not everyone!

16/08/2012:
The effects are effective for which a corresponding specification that this pedal offers. The next "priceless" effect, is to see such videos on the net asked by the owners of this kit, which begin with the image of a guy who has no other option but to snatch his jack to stem the rise in wheezing and other feedback / shrill screams provided by the beast ... with a "PHEW" relief in the eyes when the microphone of the iPod has come to collect the db that has just taken in the face. Priceless, I tell you.
On some presets offered on zvex.com, I found two that are almost manageable, and render the service expected. The rest is the fri-staïle lol!
5/10 (I bet there is to find their account)

16/08/2012:
So basically, this is a pedal that you put in the middle of the others on your pedalboard, you no doubt that from this moment, you've unconsciously abandoned by the master. It's simple: she lives her life completely independently at your feet without your permission! Without even if your presence.
A micron shift in the setting of one of the five knobs, and it is that MIR break the jaws of your shoes, your amp in Chernobyl, in 2012 and time of the last judgment, the mower just pick your last hope THE sound out that you had calculated savament!
Here! The Fuzz Factory, must be taken - with humor - like less than a fuzz like a factory: a factory to do just what she wants out of the sounds - or sounds, do not hesitate to say - Van Dammesques as completely AWARE. That is: the Fuzz Factory is JCVD ​​on acid enclosed in a box boi-cast aluminum ... imagine how he is not happy, the JCVD. And he does know!
Apart from one or two usable settings, it seems to me that the pedal engages the end of the concert when it comes from a cacophony finally release all the accumulated tensions. In this register the onlâchetout, I think she has no equity, it is even irreplaceable Fendarde so it is shifted.
Difficult to give a note with such a record, eh! Some would put 10/10, where the temptation might be ... 0 So let's be logical, it will be 5/10, right in the middle (the pedal to Bayrou, what)

Don_Viviano's review (This content has been automatically translated from French)" Fuzz factory, lends itself to experimentation"

Das Musikding The Factory - Germanium Fuzz kit
4
This is a pedal kit found on musikding, but all parts are delivered unmounted: resistors, transistors, diodes, capacitors, printed circuit, son, knobs and aluminum case to pierce yourself.
This is an exact copy of the Zvex fuzz factory to:

This pedal has the same defects as the model copy it, and we regret the absence of knob for tone.

9V battery or power supply std.
In / out.

The assembly is not obvious, but you get there by being careful and patient.

Once connected, as the true, the use is complicated: each knob interacts with the other, some settings are almost no sound, we must try and experiment. The range of each knob is very important.

This is a germanium fuzz, it sounds so typical fuzz face, but with additional settings that can do everything and anything.

The volume too loud sounds generally bcp (not to exceed 9:00), unless you have the gate and / or fully comp.

50% of the pedal settings are ringing all alone with a very musical kind of feedback that can be modulated in frequency with the drive knobs / stab / comp or gate.

The sound changes dramatically every millimeter round knob, it is very difficult to make a description.

My favorite: bcp comp, almost fully stab, gate and drive to 0, volume at 9:00. There was a creaking on its attacks on the notes and for notes, with a very thick fuzz and octave added (fairly unobtrusive). Bcp Sustain, which ends in crash if you wait too or they decreases the volume.

The bad thing (like the original): the lack of tone knob, because some settings are unusable in a group because the sound is too dull. Shame not to correct it.

I bought this kit 2 weeks ago, I already knew the fuzz factory, I wanted to offer me one for cheap. I am very satisfied. The assembly took me several hours (I'm not very clever) but everything works.

The sound seems faithful to the original, with its qualities and defects.

Only major complaint: the tone knob is really lacking for some settings.