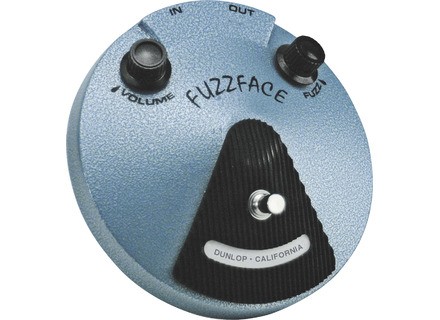 AceLeppard's review (This content has been automatically translated from French)" Difficult to tame, but made excellent, coupled with a unique atmosphere!"

An entry in a release out. Note that they are reversed compared to the conventional order.
No report led to the commissioning of the effect, use your ears!

No socket to power the pedal, unscrew the base and fed by 9 volt battery.

Pedal takes up space on a pedalboard, but look like the face of the Fuzz Face is legendary, and beautiful.
The pedal seems well built and solid.

The general configuration is bone simple: there are only two knobs!

Attention, sound editing did against by anything but simple. Unlike a Big Muff will have a strong personality whatever guitar and amp used a Fuzz Face that is tamed, and it does not solve anyhow.
Jeorge Tripps, Way Huge founder and expert es-Fuzz, do not hesitate also to suggest that in some cases, a Fuzz Face can sound really bad.

In most cases, those who argue that their face fuzz sounds so cold and aggressive nor indeed do not know how to resolve it, or how to control it.

The Fuzz Face gives the best results when it is superimposed on an already saturated amp. Attention, the higher the gain of the amplifier is low, the effect will be more significant.

Find its sound is not within the reach of everyone with this pedal, you need to be aware of.

Once we have understood how to use this Fuzz Face Jimi Hendrix signature gives excellent results, and shows a very marked character.
As well as the guitar and the amp, it is an instrument in itself.

Even if the sound is good with humbuckers, I prefer it with single coil pickups. The air Bonamassa most appropriate example that uses humbuckers.

The pedal gives me the best results by starting with a good crunch dynamic type AC / DC, Deep Purple ... Hendrix precisely (which is clear when you attack the strings more slowly).
There is then a cataclysm stuffed bass sound quite impressive and very dirty, but still incredibly musical and enjoyable to play.
It is the perfect complement to an overdrive, more subtle, like Tube Screamer.

For those seeking to sound "Hendrix" is an excellent choice after that is excellent for all types of rock and blues.
Another excellent point: the pedal as soon as we cleared considerably lower just the volume of the guitar is very subtle, and it is a treat.

I use it for a month now, and I'm crazy.
I really was not party to buy a Fuzz, let alone something as bulky as a noisy and too impractical. But that's what makes it so charming. I was captured on the first try.

Those who complain that they can not be fed by sector or to take up as much space on a pedalboard did not understand, and I would advise them to turn to the countless versions of fuzz that flood the market.

Buying a fuzz face because we love this very strong personality.
She pushes my game further and force me to give the best to tame. Musicality that emerges is fantastic.
I would like to compare with other models (germanium, bonamassa, johnson ...), and I start to dream of an original 60's ...

I like his qualities, I love his faults.
I regret it just a little crush a little high volume, but nothing insurmountable, and I think keep including if she ever leaves my pedalboard scene.

The price / quality ratio is very good.
I would do this choice.

Well I'll compare it with the Red Fuzz Benrod, immediately the sound is cold it lacks presence it seems that it is synthetic fuzz sounds shy is not chaos as announced on "voodoo child "to be rendered a little less cheap I boost with a boost-type drive TS9 immediately gives it more body ... but it is not terrible it lacks bass, attack ... it is not as straightforward as the Red Fuzz Benrod, the contribution of Silicon give the impression of staying with the cap A. .. it might be the call Signature Fuzz Jane Birkin at least we know what to expect lol "ex fan of 60s .."

The fuzz when pushed well is chaos and you can also have a drive greasy and subtle depending on the settings, I can not find this side with the Fuzz Face is missing something ... as if the product is not successful after the fan to try the Dunlop Bonamassa I find it a little more spit and made a more musical on the other hand it is Germanium as Benrod, purchase to avoid For my part, signed Hendrix argument is purely commercial ....

4 of 9 people found this review helpful

matos1977's review (This content has been automatically translated from French)

Dunlop JHF1 Jimi Hendrix Fuzz Face
5
Classic Fuzz team era of the transistor BC108 (Silicon)
Fuzz used by Hendrix to replace the Fuzz face germanium and D. GILMOUR including Dark Side of the Moon.

Operation is simple: a child's play there are only 2 knobs!

We love it or hate it: the sound fuzz is spcial trs.

For my part I Discoveries guitar with Hendrix, then through the Start / Fuzz face, so I'm in love with the sound of the pedals. The grain is one of the album Band of Gypsys.

The pedals also used by D. t GILMOUR on the album Dark Side. To make the solo is so <span style="text-decoration: underline;">perfect</span> Time (with a good delay!).

I like the pedals on his grain remaining contrlable compared to a Big Muff. In Ralite both pedals are cousins ​​but not twins! They have nothing to see! For my part I vnre the Fuzz Face. It sounds DGIG with low imprgnes trs. It is not at all unlike a versatile Big Muff, but what a start! we feel the quality! With my new Fuzz Face Big Muff My gt in a corner of the house ...

I use it with a team of Mexican Stratocaster Fender Custom Shop 69 pickups. IDAL is to use an amp lamp really! The sound of an amplifier transistor DGRAD, even of good quality (a little tuft compress. This one feels as if even the same terrible sensations of a transistor provided that It is originally a good sound with a speaker to "open" sound. But nothing beats the lamp organic living with the Fuzz Face.

MXR Dyna Comp with the EHX Memory Man Deluxe ... Proco Rat 2 and this is part of the pedals of my must-pedal-board.

For anything I spare, I love it! It is legendary!

The price remains terribly expensive ... This is the black point of the object (170! What abuse!). Anyway, the quality of legends and myth have a price! Jim Dunlop and has understood! Especially since you have to pay the operating rights of the trademark Hendrix (c) their homeowners! In my opinion, Jim Dunlop could do without this marketing ploy, since the price is rpercute directly to the consumer ... But ... has used nothing rler! The piggy bank is broken now it should be fun!

Fans of the 70's, Ruez you to a fuzz face (even with OCCAZ ') you will not regret it. For smaller wallets do you buy a Proco Rat 2, it's cheap and send! (Note there is no substitute for face grain of the Fuzz, but can be an alternative to play a good or a Red House Voodoo Chile Slight Return!).

I have both personal and I do not regret my purchase!

jimiric90's review (This content has been automatically translated from French)

If vowed need the manual, it must be something other than the zic!!
View Previous review ..

For fans of the nineteen 60'-70 ', is the best!! In addition to moving from an almost clean the mega sauce playing with the volume of the guitar, so ideal for use on amplifier crunchet lamps with a team of strat single coil!

I use it for some months and I had already bought and sold several fuzzface dunlop (silicon or germanium) that I had not given satisfaction!! At one point I had a Fulltone 69 'which really excellent silent but I spar a bit too fast ... SNIFF !!!!!
Anyway, I found this simple and ct wild when mmeun arrche with little substantive debruit pushing donf rglage the fuzz!
<strong>When we fell into it small, we can not pass without!!</strong>