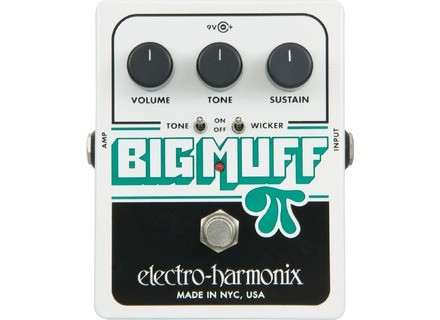 Mostha's review (This content has been automatically translated from French)

It is very easy to use, 3 knobs and 2 switches.
The volume knob rule ... volume (fantastic, is not it?)
The rule of tone equalization (it also works very well and the sound really changes throughout the course of the knob)
"Sustain" sets the level of distortion / fuzz

Then there are these two small switches: tone on / off and wicker ...

Here I take 2 points because it is a shame not to have footswitchable switch for tone on / off because in addition to cutting tone, it gives an increase in volume at the foot, could be useful ...

Fat, fat and ... fat, all that I love.
I'm not going to compare with the old big muff because I have simply never touched a (and I find it ridiculous to spit on the news, if you want to sound old big muff, you buy an old big muff ...)

It therefore has a lorgant fuzz distortion to ...
I divided this category into two because if the tone on / off really changes the sound, the wicker is barely audible.

In the first third, the sound is loaded into low (no kidding ...) I'm not a fan but it can be fun ...
Then they move to the sound that I love, in the second tier, it is exellent for playing blues-rock in the filthy black keys and white jack.
Finally, when we reach the end of the tone knob, you get a synthetic sound that I like a lot, it's not modern fuzz but the museum where radiohead for example, it can go until we have this more modern fuzz.

Whatever the setting, the sustain is huge and front of the amp, it's party ... I love to larsens

So we gain a high volume and does not change drastically the sound is always filthy (a little less anyway) but it is drier and the sustain is shorter, more fun for the rock oropendola this ... is not there fault and it can switch only justify buying it rather than the little big muff "classic"

I used it with my strat lone star and some other guitars that do not belong to me (epiphone les paul, gibson sg, telecaster, ibanez hollow body, ...) and the sound was always more.

I use it for about 4 months, I tested some other fuzz and distortion before buying, my choice is focused on it for very good quality / price ratio (a real tank that my foot ... drummer tried to kill without success.) and just his signature sound.

The feature I like least is that fat has a price: it's not bad breath ... But it is the vice of any kind of pedals ...

The quality / price is as stated above very good.

The choice I would do without hesitation.

albou's review (This content has been automatically translated from French)" The Vintage extended family!"

Electro-Harmonix Big Muff Pi with Tone Wicker
5
The features are simple: there are the settings of his great (and big) sister, namely Volume, Tone and Sustain (gain for novices). However, there are two small switch, in fact fairly discreet, changing the institution entirely.
Entrance, stamped "input" and "amp" output and finally a true bypass. For the price it is enough!
Of course, it is out of the question to speak of other digital editions or 'witchcraft'. The transistors are those who have made the reputation of the family's Muff.
Nothing to say, it is a Big Muff and it's like that.

To use the thing is quite clear if we already owned or used a pedal drive or distortion. Volume knob for volume (excluding December '?), The tone knob for the master EQ and one to sustain the level of distortion is desired.
Nevertheless, one can not help fiddling with two mini-switches available ... But what the heck is that? The manual is in English it does not understand what Mike wanted to Matthews. In theory, if the tone switch is ON and OFF wicker, we get the original sound of the Big Muff. This is debatable, but the sound is better than the Little Big Muff (meaning closer to the original).
The manual is very clear for the theoretical explanation of all the settings, but as with everything, the best is to try ... And that's what we'll do!

The sound ... What about ... The Big Muff does not have to prove the original sound is a classic among classics. A very fat fuzz endless sustain that works both in rhythm game lead in single or dual microphones (including p90). In addition, the tone and sustain knobs allow very subtle changes that go from light colored fuzz drive for blues and funk, to Hard Rock and Grunge very powerful.
But if we had wanted to "limit" to that, we would choose the original. When you push the Wicker switch to the ON position, the acute increase instantly and give a little more power to her. It's subtle, it's not revolutionary, but it is there and what is ultimately quite handy even if you lose a little heat.
The revolution is rather right side: at the tone switch ...
When it turns OFF, the tone circuit is cut and the volume increases by a quarter or a third party. We must therefore take precautions when the off.
But the sound is very different: a powerful distortion and couilllue which somewhat resembles that of Germanium 4 of the same brand is obtained. Sustain shorter but it's perfect for the rhythm and rock riffs.
Ultimately, I used mainly the 'fuzz' circuit I is hell! Versatility (in fuzz tones of course) is hell, the fat that remains incisive quality!
The distortion is less, but perfectly functional for that matter.
Finally, the mini-switch wicker could benefit from a 'real' way to switch a boost I finally ... Ca is the big breaks anyway!

I use it for almost 6 months and I have not yet done the trick! Multiple opportunities that can meet many different musical styles. The purpose of Mike Matthews, when he designed the Big Muff, was to create a distortion that can reproduce all the notes of a chord with a "sharp" equivalent for each note. And it works! It does not get messy when we add a seventh or whatever, and I love it!
On the other hand this is great with the EHX is the quality / price unbeatable always at the expense of a certain neutrality and tonal versatility, and that's more like it! One likes or dislikes.
I would do this choice without hesitation because I love, I love the same!

Finally, I would like to take on some of the remarks in which "the Big Muff today is crap and all the others too! It is a distortion as another! And those kids not wash the hands before sitting down to eat Ah of my time ... etc ". In this case, all stop playing the guitar, they are all zero in chi ** compared to the 60's-70's.
Know, my friends of the 21st century, we can not reproduce the manufacturing quality of the time when much to do with what we have, and do not act in bad faith in the quality. Thank you for your attention!

It is true bypass

The case is more rounded and more modern than its sister red, green does not suit him so badly in fact

Regarding the settings, there are 3 knobs on the beast:

- VOLUME: you guessed it, it adjusts the volume pot ..... volume!
- TONE: Adjusts tona / EQ
- SUSTAIN: Here you set the gain, do not ask me why AC is called sustain the blow!

No problem to use the beast is the rule as any distortion pedal, it activates and it scares the neighbors.

For those who are wondering what it was more than a Big Muff Pi "classic", I reply: 2 switches
If you leave the switch in tone to "ON" and that of wicker "OFF", it will sound exactly the same as its sister red

on the other hand, in bypassing the tone and / or activating the wicker, everything changes!

The tone off, we understand why it is not deactivated at the base, AC sends a boost in your sound and in the middle of a song you delete the rest of the group

The wicker is more discreet, limit audible depending on the settings of your amp.

I did not notice any signal degradation as I've read the previous opinions, the true bypass is its effect

I use it recently but I like this pedal!

If you already have his sister (Big Muff Pi) you can do without, on the other hand if this is your first you are looking Muff take the green trend and pay you that one.