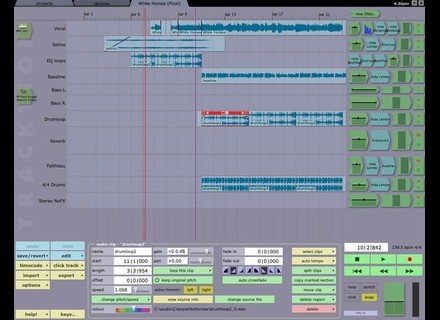 Tracktion, General Sequencer from Mackie in the Tracktion series.

Mackie Tracktion
5
There's nothing missing that I can tell so far. I can't express how much I truly LOVE, LOVE, LOVE this program!...

400.00 with the Spike system, much cheaper by itself

First of all, I am new to music production. I'm getting in when no one is doing it on a bunch of expensive analog equipment anymore. Aside from using a very simple cassete based 4 track, I have no working knowledge of analog equipment for recording. I am STARTING OUT in hard disk recording and production, and there are only going to be more and more people like me. Not having any past or knowledge in analog recording, I found EVERY multitrack software program out there VERY difficult if not impossible for me to use. You see, they ALL cater to people who have been recording the old fashioned way and devise screens that look like mixing consoles and such, with ultra busy buttons and sliders and sub menus and pop up and pull down menus. I however don't know ANYTHING about BUSSES or AUX SENDS or INSERTS or any of that stuff you find on knob laden analog gear. I've tried Sonar, Magix Samplitude, Pro Tools, etc. and have hated ALL of them because I have no analog recording knowledge. Then, I found this program called TRACKTION, distributed by Mackie. It is a savior for people like myself, those just getting into and starting out in computer based recording. I was able to do things with this program in litterally ten minutes that I STILL haven't been able to figure out how to do in others after using them for over a year. You see, this program is designed from the ground up as a &quot;computer users&quot; program. It operates like a computer program. It doesn't pretend to be an analog mixer, it doesn't have stupid pictures of analog equipment with knobs and stuff, there are no BUSSES and AUX SENDS and other such nonsense that I don't understand. If you have used ANY computer program before, you can use this program. You don't even ever have to have laid eyes on a mixing console before to get recording on this thing!... And all those other programs claim to be &quot;intuitive&quot;! Well if they are &quot;intuitive&quot;, Tracktion is down right &quot;SELF EXPLANATORY&quot;. I ABSOLUTELY LOVE IT!...I no longer feel TOO uneducated in analog recording to do computer based recording!...

Wonderfull sound quality. Great sounding effects. And there is NO limited bit depth!

I'm ready to marry this thing!

Originally posted on FutureProducers.com
Posted by: highmarcs ( 3-, 2004)
Did you find this review helpful?yesno
»

Mackie Tracktion
5
For a multitrack with vst/vsti support the features are pretty solid.Some would like more midi featues,but it's fairly solid there too now at ver.2. Recording features are great.Vst handling is super.Modular routing is the way to go. With the right vst/vsti's your in the biz. The rack feature is very flexible too by the way.Great modular routing of your vst/vsti's.

Utilization: Almost imediate.In have tried my fair share of programs,and this was the easiest to jump right into. The more advanced features may take time,but basic operations are simple to learn.

Sound quality is as good as it gets.

Very stable even on my puny win98se 256mb system.Only crashes with incompatable plugins.

Overall this program can do it all if you have the right vst's you should'nt have too many limitations. I got mine for free during the promotion Mackie was running back in dec. 04.So my review is for ver. 1.6. For the average joe this may be a better purchace than Cubase,Sonar,protools,ect.Based on affordabilty,and usability+stablity. Also very light on you system. I like the future of this program,as it will be actively developed.

Originally posted on FutureProducers.com
Posted by: Mattman04 ( 6-, 2005)
Did you find this review helpful?yesno
»