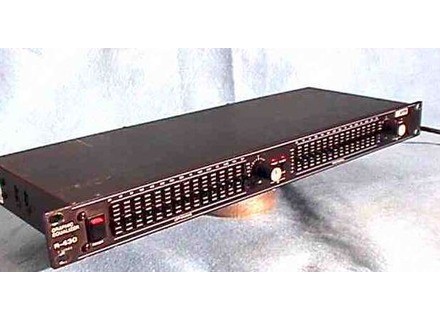 DOD R-430
4
The DOD R-430 is a dual channel graphic equalizer, suitable for use in the recording studio or for live sound reinforcement. It is an analog piece of gear, with input and output connections for each channel, both in the form of 1/4" and RCA. It is a rack mountable piece of gear, only taking up one space in a traditional rack system.

There's nothing hard about using the DOD R-430. It's a simple graphic equalizer, with 15 bands on each of the two channels. The frequencies range from 25 Hz to 16 kHz, so pretty much the whole spectrum that you'd like covered is covered here. Each channel also has a low cut button, an in/out button, and a knob for setting your output gain level. That's pretty much all that there is to it, so a manual shouldn't be needed.

While I wouldn't say that the sound of the DOD R-430 is anything to really write home about, it has a good enough sound to get the job done most of the time. I don't know that I'd recommend using it in the recording studio over using it for live sound, as it seems better suited for live shows. Most of this probably has to do with the fact that it is a graphic equalizer, as I find parametric EQs to be a lot more helpful in a recording studio setting. You do have a good amount of control here, but it's best for eliminating a larger width of frequencies rather than zeroing in. It won't color your sound other than the changes you make to it, but really doesn't bring much to the table in terms of sound beyond being able to make simple EQ moves.

I can't say that I would encourage you to seek out the DOD R-430 specifically if you're in the market for a graphic EQ, as there are plenty to choose from in this price range that will do the job just fine. Although it doesn't necessary stand out, it does the job just fine and should be the in conversation if you're looking for something inexpensive. So while there are certainly adequate substitutes for the DOD R-430, it's still a very solid graphic EQ on it's own...