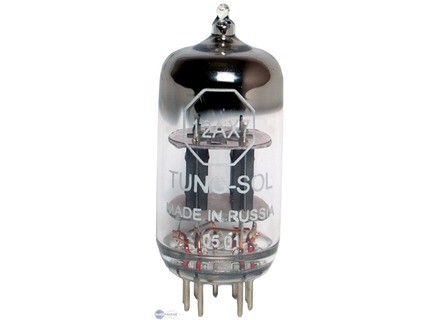 Tung Sol 12AX7
5
I had been waiting for some time to try these particular 12ax7 tubes out. I had read a great deal of good things about this model of tube and had very high expectations going into the purchase. I ordered these to go into the third high gain channel of my VL503. I had been very happy using the Sovtek 12ax7lps across the board in that amp for years. This is an early nineties model amp designed by Lee Jackson for those not familiar with the model the third channel is his custom modification design from when he used to modify Marshall JCM 800s for many name player back in the 1980s. Very loud, huge roar and growl with a lot less of the bad part of the upper registers. The Sovtek tubes had a very full and rich quality but I had to know how these tubes would perform given all the hype I had read on them.
At first I was a bit disappointed with the Tung Sol tubes, they had a harsh quality I was not accustomed to and honestly did not appreciate in that amp. I however gave them a good chance to break in and I am fortunate that I had the patience to do so. After about 8 hours of time they started to sound much better. I can say they have a very high tolerance to gain and sound very good when pushed hard. They do not seem to compress in a bad way but stay open sounding as you throttle them. They cover the full sonic range of the channel with ease and authority. They however are not a smooth sounding tube. They have a higher level of clarity to them. They are not brittle or harsh but simply clearer than I am used to with the LPSs. The bass is a bit more well defined as a result and that is a bonus because that channel of the amp has a tendency to get boomy and now the low tone control has a bit more functionality than with the Sovteks in there. I would not however say they are superior or worse than the Sovteks but simply different in a good way. Where the Sovteks add a smoother compressed fell these have a more open and airy feel. These will not replace any of the tubes I use on a regular basis but instead simply offer an additional soundscape that I find pleasurable and useable.
Did you find this review helpful?yesno
»

Tung Sol 12AX7
Did you find this review helpful?yesno
»

Voivod K's review (This content has been automatically translated from French)" Dpoussire an amp!"

Tung Sol 12AX7
Did you find this review helpful?yesno
»

bdrecourt's review (This content has been automatically translated from French)