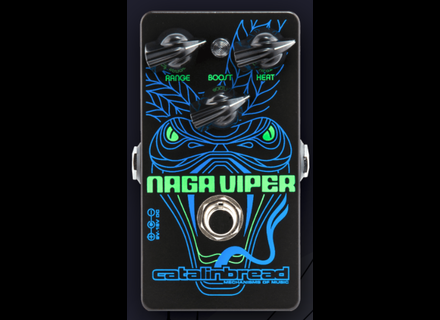 Catalinbread Naga Viper
5
Anyone who has used a Vox amp long enough will tell you their biggest woe is finding a good, and affordable dallas rangemaster clone. Most people have heard of the rangemaster, they just don't know it. It's the "treble booster" pedal that so many AC30 players brag about. You have to hear it to beleive it. Basically you crank your AC30 and put one of these in front of it and crank the boost knob. That's right. The original had only one knob. Catalinbread's version actually has two more controls. The range knob controls the voicing, from classic to modern boost. The gain control let's you vary how much distortion is applied, since the original was just a booster.

At first I was a little apprehensive of a rangemaster clone that wasn't a one knob version but I quickly got used to this 3 knober layout. Also, it seems like a reliable pedal, just as all my other catalinbread pedals are. Simply put, if you know what this pedal is supposed to do and need one, you know what to do anyway.

A lot of people think a treble booster is supposed to boost treble. It does but that's not really the draw. It adds a very special push to an already boosted amp...specifically an AC30 that's on full throttle. AC30's cranked sound okay, but they can be kind of unfocused and lacking in definition. Plug this in and you get the meanest most raunchy distortion you could wish for.

All I can say for this pedal, is plug it into a cranked AC30 with alnico blues and a good guitar. Strum some chords and tell me it's not amazing. The organicness of the tone is something special.

I've been waiting for this kind of pedal for a while and it's sad no one made it earlier. I am a big Catalinbread fan and they make some solid pedals. The price is high up there but you get a great hand wired product. I can't recommend this enough for anyone using an EL84 amp. It's magical.

Published on 08/23/11
Catalinbread describes the Naga Viper as a booster in the tradition of the Dallas Rangemaster Treble-Booster, which was used by British guitarists such as Tony Iommi, Brian May, Marc Bolan, and KK Do…