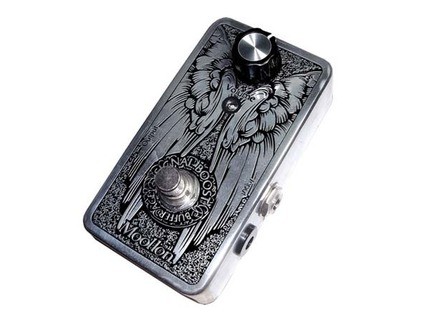 Very simple configuration, two buttons
No need for manual use
The sound editing is simple, a button that manages the gain, the other aspect drive

The sound is realistic, leaving the natural sound of the amp to speak alongside his colleague from MXR at the BOOST LINE / DRIVER. In addition it has another function, a second button which actually helps the sound driver. Overall, we can push the sound up to 12dB, which leaves plenty of clean sound, with the drive that can possibly make it a little fatter. The difference here again with his colleague in the MXR is that it can go up and 20DB offrire a real effect of "fuzz" natural outcome of the amp, while the boost in Moollon, it offers more a kind of "overdrive" sound.

I do not use it personally, however I had the opportunity to try it in store connected MESA BOOGIE LONESTAR SPECIAL, and my choice was directed to the MXR that presented characteristics semblabes for cheaper and certe less "stylish". However I think they are as strong as the other one.

The -: It costs relatively expensive in store for a simple boost (even if done entirely by hand)
The aspect that drive for musicians like me who looks for his natural serve strictly not in any way, in contrast to others who would like to pair a rather drive or overdrive to boost the effect of why not.
Goes up to 12dB (for me), it is far below its sister home MXR
The aesthetics of the pedal is included in the price (after it's still a choice!)

I do not use it personally, but I had thus an opportunity to try it in store, and my choice (after further testing of other brands) is rather oriented to his colleague in MXR BOOST LINE DRIVER, better value / price for performance and robustness semblabe to pedal at Moollon.

My complaint is that it put out is an "overdrive" sound which would be inappropriate to musicians seeking only the natural sound of the amp like me, it's a quality / price ratio in my opinion too high for a simple boost pedal, even if it has the merit of having actually was done by hand.
Indeed, many brand claims to do, but eventually you realize that part is done by hand, the other part is the micro welding factory.

So for - from 208 € (92 € for his colleague MXR), you have an MXR pedal all the brand as good (factory made but much better than the BOSS pedals in ROLLAND or in some Zvex pedals), certe less aesthetic than the Moollon, greater respect the natural sound of the amp (since no effect of overdrive or drive incorporated) but more powerful in its effect of boost (+ 8DB besides the Moollon), enough to obtain an effect fuzz natural outcome of the amp without tired lamps.