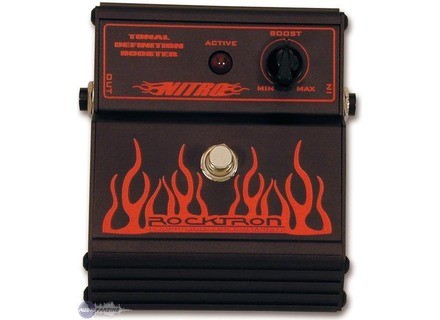 a knob, you turn and hop

boost the flight with that little extra in the harmonic

This is the boost that boosts me when I play

-Livingroom-'s review (This content has been automatically translated from French)" Good for the price."

Rocktron Nitro Tonal Booster
4
Memory (this effect passed away for a while, so forgive my errors of memory) is an analog boost in a big (too big?) Metal box with flames kitsches wish decoration. A 9v power supply on the side (for the sake of convenience on an object as big, put up would have been easier and normal), a switch and a led a simple knob effective dosage. Jack in, jack out, and roll youth!

With a single button, you will not lose ... Attention, however, the hen's beak knob is sensitive to tiptoes, a round cap or a notched knob would have been a plus (suddenly at the end I pulled the cap to prevent the cat).

ON can also regret at least one tone knob or a full eq, but this simplicity also makes the charm of this boost.

For my part I find this effect (such as Rocktron range in general for that matter) a little cold to enhance a solo in the style that I practice. Moreover it compresses a bit which may offend (though that bringing an additional stage saturation, it necessarily compress), and I find it much tape at the top medium (3/5khz), which in itself is a advantage to break into the mix, but can distort your sound. I do not remember having tested upstream saturation, but it must make a color hard rock I guess ... A test!

I may well be used for 3 years, I do not like its size its decoration and its lack of practical advantages, I like its price and efficiency for beginners. The value for money is good, in secondhand today it really worth it, since I have tried many other boosts (fulltone, blackstar etc), which are not in the same price range, but it has his personality is undeniable. After it does not suit everyone.

Echo tango's review (This content has been automatically translated from French)

Rocktron Nitro Tonal Booster
5
Not rocket science. Just a dot of a boost switch and a knob for rgler the level of boost (up to + 22dB). Jacks in / out, external 9v power supply or batteries. The case looks KostO and should rsister normal use. I bought it to replace a DOD FX10 BiFET preamp, which made the switch adfinitivement me (but can we call a switch?). Nothing wrong, except that I prfr an external power supply jack the rear of the pedals, not the simple matter of size ct on my pdalier. On the other hand, why such a large box for a fact that simple? May be able to affix the beautiful flames that the large dcorent. I was just to remove a point.

No need to leave the Polytechnic to use it. The manual is succinct but clear.

As I said + above, this replaces my PDAL Previous boost a home DOD FX10.
I actually uses to compensate for the output level diffrence between my two guitars (a standard Start and a Cort M600). Not only balance levels are now (no need to tamper with the amp each change of scratching), but the Nitro adds a je ne sais quoi that we could compare a compressor, a booster and treble enhancer connected together. Suddenly, the sound becomes + alive, the dynamics of your playing shows without difficulty. In short, difficult to dye ...
In résumé if you want a REALLY boost perfectly neutral, will probably look elsewhere. If like me you use lots of pedals and your sound loses a little is the tool you need.

1 month I have and frankly, it has earned its place on my pedal board.
Less noise than my dfunt FX10 (I did not need to boost normment). Also tried: the Marshall Bluesbreaker (as I have a good dj overdrive, a bit redundant c'tait not buy it for the boost), Nobels a preamp (which I boosted when m me an acute cabbage).
What I DCID: the "lifting" of my sound, simplicity of use, low noise, and price (69). A must for any guitarist who must fight against his collgues to get his solos, and try all the other ....

la souris's review (This content has been automatically translated from French)

on the other hand is true that this could be PDAL + small in size, such as Seymour Duncan boost for example. But it is not standard either (a little bigger than a Boss pedals that is).

It's easy for a bitogno rgler volume, and one for the trigger!

Effective as to boost clean sounds that distorted sounds. In addition, the Nitro adds distortion to your amp natural and compresses the sound a bit. So it is perfect for solos.

I use it for about 10 months and I've never had problems with.

Did you find this review helpful?yesno
»
Read the 7 user reviews on the Rocktron Nitro Tonal Booster »