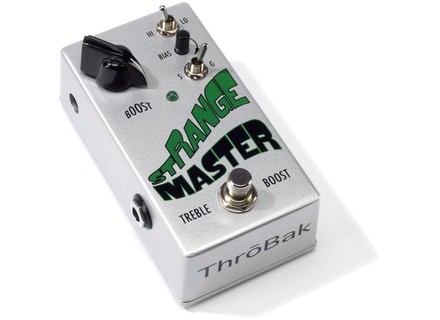 Throbak Strange Master
5
This is for all intents and purposes a clone of the old Dallas Rangemaster that's so popular and legendary. I'm surprised that no one else (to my knowledge) has made one besides Throbak. Perhaps it's too expensive to do under $200? I'm not sure. It has a bias adjustment knob and a voicing kind of switch. I'm not super familiar with the tech side of what Throbak did with this pedal. But it's hand wired and obviously a very well made pedal. Again, I'm sort of in shock that no one else has made something like this. You would think Rangemaster clones would be in bigger demand.

To my knowledge there isn't a manual and Throbak doesn't go into great detail on the functions but this pedal isn't hard to figure out if you just sit down with it for a second. I think most players will use it to get those classic sounds and won't bother with the odd tweaks you can do. Sure it's nice to have but personally I bought this because I wanted classic rangemaster sounds.

There's something magical about one of these through an AC30. On all the forums you hear people talking about OCD's and Hot Cakes and RC Boosters when AC30's get mentioned. I'm here to say that I've tried all those and they are fine, but the Strangemaster is a much cooler animal. It makes the AC30 sound MEAN. Treble booster is correct. It makes the amp snap and snarl. Not harsh, although if you like your bass this might not be the pedal to get. It really cuts all the mud out of the amp and gives it crunch. You have to hear it to know what I mean.

I think everyone who owns an AC30 should try one of these. Yeah they aren't cheap but a lot of AC30 guys I know don't care about price. I don't understand why this pedal seems to go largely ignored in gear circles while the same old same old overdrives keep getting play. For my money this is one of the best AC30 overdrives I've ever heard. The 70's guys did it right the first time. And thank god that Throbak is making this pedal, otherwise this classic pedal might not ever be available. I really feel like I'm doing a PSA with this review. Throbak deserves some kind of award for taking the effort to get this pedal made.
Did you find this review helpful?yesno
»

Using the Throbak Strange Master is incredibly simple.  You have a knob for gain and a switch to choose between either treble boost or a full range boost.  That's really everything that you need to know about the pedal, so as you can see the pedal is pretty self explanatory.  No need for a manual with this one.

The Throbak Strange Master has an absolutely superb sound quality.  I have used the pedal with both a Fender Jazzmaster and a Fender Stratocaster through a 1976 Fender Twin Reverb amp, and this combination I feel is perfect for this booster.  Both of the modes (treble and full range) are awesome, but I usually have this pedal on full range as that is usually more of the sound that I'm going for.  I've used the pedal both in the studio and on the stage and I find it to just be the perfect pedal for when I want a subtle (or sometimes not so subtle) boost.  The Strange Master is made extremely well with all top notch parts and care.

Since Throbak is not a large company, they can afford to really put the care into each and every one of their pedals, and this is the type of build that you will see with the Strange Master.  I never have to worry about this not working as I know it is built to a T.  The price is definitely not the cheapest, but for a boutique company it is actually pretty reasonable.  If you're interested in a booster, this is probably isn't available in stores to try out, but do some research and hear some samples and I think you'll be pretty impressed with what this can do.