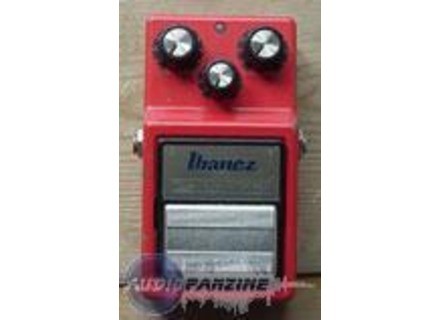 CP9 Compressor/Limiter, Compressor/Sustainer for Guitar from Ibanez in the 9 series.

All user reviews for the Ibanez CP9 Compressor/Limiter

Ibanez CP9 Compressor/Limiter
5
I've been playing guitar & bass for over 30 years, yea an old timer. Anything from heavy metal to country and every thing in between. I have pretty much given up gigging and jam with friends on weekends.

Bought this pedal new in 1982 can't remember how much it cost.I'll guess about $60. Bought it to use for guitar and then tried on my bass.
I have bought a used unit to replace it, $100.

The original pedal was stolen at a gig about 10 years ago. Tried Boss,DOD, Digitech & others since then. Had to have another CP9. The attack & threshold really do work, as the others seemed like knobs connected to nothing.It was the quietest of them all too.

The fact that I had to buy another one cuz the first was ripped off and paid more for the used one recently. Also with age the switch has gotten a little touchy. It may take a couple of taps to engage it. But I leave it on all the time anyway, so no biggie.

This pedal is built for a war zone. 1/8" thick metal case, hand wired onto a thick circuit board. Pop out battery cover on bottom, no screwdriver need, or a 9 volt adapter. Made in Japan from 1981-84 before a lot of effects started being made cheaply in Korea & Taiwan. Probably the the most solid built pedals I've seen.

This pedal was made for a 6 string but really does a fantastic job for a bass, which I use it for. It is more of a sound enhancer than an effect, to balance out the whole range of notes to the same volume , be it open low E or fingered high G note. Will add tons of sustain if wanted also. Great an all counts.
These are getting harder to find and prices going up, but was worth every cent. If you've got one, keep it. If not believe me,this one is tops.

Ibanez CP9 Compressor/Limiter
5
This is a compressor pedal, it gives you a good fishing évidamment is a pedal analog year 80, a super simple one connector jack back, jack went to a location for the 9V battery

configuration is very simple 3 button for you to find your sound!

to have a good potato there are not better, I still emissions especially with my low cut that gives a damn!

I've had 30 YEARS, it still works well at the time when I was a kid I wanted a pedal that gives the potato, is it always

kourse's review (This content has been automatically translated from French)" vintage, powerful and well Music"

Ibanez CP9 Compressor/Limiter
5
so it's a pedal compreseur, sustainer, so it goes sounds not too unlike attacked and "calm" notes too bourrinées (the simplest explanation possible

is an analog pedal, which dates from the 80
input, output jack, power supply 9volts
here

no manual, test there are only 3 knobs, you have to test ...

Then I used it for a big potato in clean sounds on my les paul and it works very well see, however, it must be even more obvious on a simple guitar pickups type strato
must reconnect the like!, I use it more now
In any case, huge dynamic range, very clear but not totally, finally, all the pedals, I think the color channel, it must accommodate

I therefore used for a while, I had bought by a "afien" on occasion, this series ibanez is great, robust, simple, effective and musical.
the painting part, but the sound remains


2 people did not find this review helpful