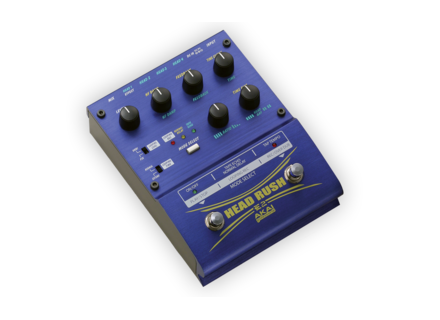 Akai Professional Head Rush E2
5
I use both the tape analog mostly but the digital delay works very well too. I use a TC Electronics Ditto for my loop. Both of these pedals are awesome; together, I doubt that there is a better combo for an on stage pedal board.

Tape analog and digital delay each SUPER easy to use and they do it very, very well.

Almost perfect. The downside is the large footprint and that a standard 9v (adapter) isn't used. The loop time is very short, hence my use of the Ditto looper (10 mins and SUPER small footprint).

Overall, it is worth it's price just for the tape analog delay and digital delay, both for the ease of use and the customization abilities available. The size being that of two pedals makes it ok as you ARE getting two pedals in one.
Did you find this review helpful?yesno
»

Akai Professional Head Rush E2
4
The Akai Headrush E2 is a standard digital delay. It's pretty barebones as far as these pedals go. The settings are arguably the most minimal settings on any a Digital Delay, simply being able to adjust level, delay time, feedback, etc. The last switch also incorporates a hold; feature, which will basically loop short phrases as long as you depress the pedal with your foot. There are two outputs, one on either side, but i haven't ever used more than one so I can't comment on using that. There's nothing crazy like midi or computer editing options on it either.

This product is incredibly simple. If you don't want to much getting in the way, this would be perfect for you. Not much too explain and will only take a few moments to get a grasp of it. Even if you don't know what any of the knob settings mean at first, you'll get a feel for it quickly.

Akai makes great digital delay pedals, and this one is no exception. I've never had anything but good experiences with this pedal as far as sound quality goes. I play guitar and I think the pedal is perfect for this, though I doubt a bass would sound any worse going through it. The hold feature is pretty cool although it's not a replacement for a loop station, since it tends to sound pretty clipped. It's better as a jarring effect then a legitimate loop.

I've used this pedal for about 5 years and I've never had a problem with it really. I sometimes wish that I could do a bit more with it, but that would mean getting something much more expensive and generally unnecessary for me personally. I like how simple it is, which makes it easy to change settings on the go. That being said, programming pre-set settings onto it is not possible, and that would likely make it easier to use in live settings. I ended up going with this simply because it was cheapest, so I'd recommend shopping around and maybe checking out some other pedals first (check out the other Akai pedals, just because they all tend to sound pretty good.) I don't know if I'd pick this up again but it's certainly not a regrettable choice.


There are controls for level of the delay or looper, high frequency damping (high end roll off), feedback, time, ratio, and head gap.

1/4' inputs and outputs including a wet only output, mix output (head 1), and outputs for heads 2,3 and 4. It requires a 9volt Dc adapter

I bought this pedal second hand without a manual and didn't have too hard of a time figuring it out. The basic set up is just like any other delay pedal but gets a little more intricate if you plan on using the individual head outputs. I did not get too into that part but it allows you to send four separate delay lines out through different outputs. The delay lines are divided by the ratio and head gap knobs.

I used this pedal in a guitar set up and the sound quality was great. I never really noticed any tonal degradation but then again I'm not super particular about that kind of thing. I don't set my amp up with just the guitar and then expect it to sound exactly the same after plugging ten pedals in line before it. The tape echo mode was very nice and the high frequency damping allows you to get a pretty authentic sound. I am sure you would notice the difference in a studio but for live use I would much rather drag this out then bring an old actual tape unit out that requires maintenance. The looping was very clean and the stomps have a great feel. This is on par if not better than the line 6 dl4 in regards to getting you loops in time.

I have heard of problems with people loosing loops and other hiccups but I never came across this in the 2 years I owned it.

I think I am in the majority when I say that I used this pedal in looper mode 99% of the time. The delays sounded fine and I'm sure there are people out there that love the separate "head" outputs but I think there are better options for a stand alone delay pedal. The looper is just great and is worth the price of admission on it's own. I no longer own the pedal but I would buy one again in a heart beat if I needed another looper.
Did you find this review helpful?yesno
»

carimbabar's review (This content has been automatically translated from French)

Akai Professional Head Rush E2
4
The E2 Headrush is a delay, echo, with separate outputs, and to a lesser extent a looper up to 37 sec.
It was in the order of the knobs, the level of the effect (or loop in "variable" mode) a damp hf, which cuts treble on the effect, the number of repetitions of the delay, and a mode manual adjustment of delay time thereof.
It was then a setting that allows you to set when the delay is fading, and a time to narrow, more pointed, the first setting of the genre (if I'm making myself clear).
It has two switches, one for the output level of the loop (in looper mode, so) that may be affected by the level knob, or remain stationary, and a second that defines quality and time looping, 11 or 37 sec of memory.
The outputs are in jack 6 "35, and there are 5!
A main, which couples the raw signal and the processed effect, and 4 others intended to simulate the passage on the heads as for tape echoes. They can therefore join different outputs, 4 amps, 4 channel strips or more reasonably, 4 audio interface inputs.
No editing by computer possible, no usb, you plug the microphone (with an adapter), and his guitar playing, old.

The config is very simple and clear, I do not remember having too consulted the manual but I downloaded easily, manual pdf in case.
Editing sounds is simple, the commissioning of the looper too, but the buttons would have earned to be bigger, especially switches to start and stop loops. If it does not bother me when using the delay for the looper, sometimes I was not able to start my loop or stop in time, which is sometimes annoying.
Mode change, delay in looper, could also benefit from a different type of switch, with two switches at the same time, it's not top-top.

Side effects on the other hand, it's great! I like the delays, color, sounds fast and well, even in the studio, I use little echo, and I rarely use more than one outlet, I'd better explain the Camaguey everything.
The looper sounds great too, no loss of sound or dynamics, compared to a Digitech JamMan, or Boss, it sounds much better, less corrupt.
I use it with electric and acoustic guitars, electric bass, sometimes a voice and machines by assigning it to send my mixing desk, live, it works very well, thank you!

I have a few years, it is still good, no worries.
The pedal is solid, well finished, connectors qualities, nothing moves, or do crunches, or any noise "beginning of the end."
She is beautiful, I like the color blue.
At his level, I have not tried other delays, except maybe a Gigadelay Boss, which is a sacred gasworks.
There at least we live in the heart of the matter, the idea of ​​multiple outputs is interesting, but I've never taken the time to actually operate.
I used the delay, direct mode with tap tempo, to play alone or to the effects of "reggae" type.
The looper is great in terms of sound, but I still run properly galley loops or not I pressed enough, I press two switches at the same time (I do shoes as 43), well ... However it sounds great, even if we can not store or save the above-said loops.
I bought 119 euros Musik Store, I can not even remember when, I always have it in my pedal board, ready ...

Did you find this review helpful?yesno
»
Read the 10 user reviews on the Akai Professional Head Rush E2 »