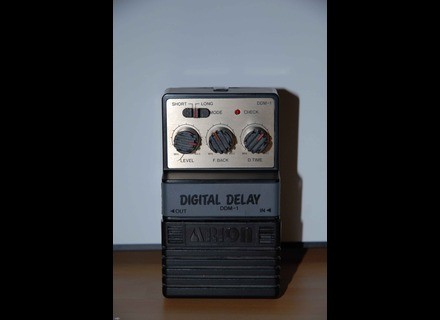 This is a very nice pedal for it's price range if your looking for short delay effects. Offers about a second and a half of delay, though not very long, it works for echo/reverb effects. It's probably become one of my favorite pedals. It has two modes, short delay and long delay. Perfect for reverb effects without having to pay twice as much for the next best Digital Delay.

Poor construction. The whole thing is made out of half way decent plastic. But the nameplate that covers the battery is broken and also the wires that connect the 9 volt to the pedal is torn. But hey, what are adapters for?

Life_Is_A_Pigsty's review (This content has been automatically translated from French)

Arion DDM-1 Digital Delay
4
I do not really have much money, and I like the old stuff, even if sometimes it does not ring top, I like having a piece of musical history in my hands (well, Arion has not revolutionized music, but a model of the brand stands out, the Stereo Chorus - SCH-Z - see the reviews on Harmony Central -).
This brand-1980s largely copied the other. Thus has emerged a SOD-1, clone Boss etc. ...

Three knobs and a switch, but a lot of possibilities. That's the thing about this pedal.

Interested in the modulation effects, I wanted a small delay that allows me to test things a little. I chose this one because it was cheap and that his visage was mine enough.
Received, I realize that the plastic of the access door to the battery is missing, shit, that's ugly. I produced a cache Fimo, that's not great but it is temporary (we just buy new on a website). Although this problem is rather recurrent in Arion, access to the stack is one of the easiest I've experienced, like the Ibanez 5 series, just press on the ends so that the cover is lifted.
The plastic is thick and strong. In fact, I do not understand the controversy surrounding the plastic pedals, Behringer and other brands for example. Paying attention to my pedals, I'm sure (knock on wood) that nothing will happen to them, I do not throw them against walls etc. ...
Sure, the main shortcoming of plastic is that it's ugly.
And yet, with kits for rehouser pedals available on the internet, the problem is solved as we know handle a little soldering iron.

The switch is factory-fitted for its obviously not true bypass, but it operates smoothly, without sound poc.
For now, everything is perfect, but we will see in the future.
Turning to the analysis of the knobs:

Level: control the level of effect.
Feedback: Playing on the content output fed back into the effect
Delay Time: Set the number of repeats caused by the effect


Jack plugs are embedded in the PCB but nothing keeps them apart, it may be a minor negative for the overall strength, but as it is on my pedalboard, there are no connections / disconnections successive.
Power is supplied either by cable, type Boss, either by a 9v battery.

I did not observe a strict audible difference between the sound goes through the pedal when it is not enabled and when I plug the guitar directly to the amp. It is therefore clear, in my opinion (subjective aspect because some are more sensitive to noise than others).

A little bit of breath can be heard if we push the level at max.

The Level is only useful to assay the effect.
A small switch toggles between a delay "long" delay to a "short". So we have a panel that covers 60ms to 400ms.
The knob "Delay Time" is useful to fine tune the number of repetitions that you want to see. Cranked, you can get an infinite delay, but the sound becomes rough after a few seconds if you play a lot (for some notes, it does, but for sequences of arpeggios, not possible).
The feedback knob for the determination of intensity of his treatise.
By pushing it to the max, the delay from self-oscillation, rather funny (also when you move the knob when it is in self-oscillation, it makes a noise of electronic distortion, I like to play with that ).
Configuring it to change it very little sound, you can get some kind of reverb ..

Highlights:
Original price: 60 to 70 €
Rather transparent
Both modes Short and Long
Battery operation or mains

Weaknesses:
Plastic look that does not really out of the ordinary
Soft knobs

Other Arion delays/Echos/Phrase Samplers for Guitar