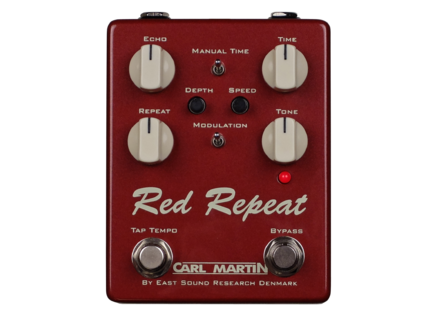 Carl Martin Red Repeat 2016 Edition
5
SOUND:
I REALLY like this pedal. The echo in the Red Repeat is reminiscent of the Echoplex and Space Echo units of yesteryear, but with obvious improved clarity and with today’s technology. Below is a sound sample demo video (including an instrumental with drums and bass about midway through):

Carl Martin is known for developing ‘solid’ pedals and gear. Some other companies have produced gimmicky or even more unique style pedals, but when you’re looking for something straight-forward and sounding great, this company routinely delivers. Red Repeat certainly can produce ambient style results (turn up the Echo, Time and Repeat all the way and then stand back!), but it truly shines when it comes to those guitarist wanting a basic delay that is easy to use and sounds awesome.

The demo video starts with a basic or traditional slap-back type echo, and then I increase each element individually… Echo, Repeat and Time… and then demonstrated how everything turned pretty much up full still sounds clear and defined, rather than muddy with sound bouncing all over the place.

The second aspect that makes this pedal unique, a feature in the 2016 edition of the Red Repeat is the Modulation, which can be turned on and off and affects only the echo and not the dry signal. Think of it as a tremolo or ‘wow and flutter’ effect, similar to results produced by older tape echo machines. There is the Depth knob and the Speed knob. Obviously Depth refers to the degree of the modulation, whereas the Speed, when turned low has a wavering and flowing sound… and when turned up produces a faster pulse. You can produce some very nice Echo effects with this feature, from a spacey vibe to rapid and obvious detuning.

The third aspect I like is the Tone knob, which affects the EQ of the echo (not the dry signal). And so, you could have a signal that has more treble in it, but you can have the echo sound darker – and vice versa. Certainly you can match up the tone of the echo with that of your guitar, but creating a tonal contrast adds nicely to the thickness and personality of the guitar’s sound overall.

OVERALL IMPRESSION:
This is a 2016 re-issue, adding a Tap Tempo and a Modulation effect to the echo. This is an incredible delay pedal because of its simplicity and high usability. The echo is so clear and articulate, and the best I’ve heard; absolutely no ‘mud’ or messing with the original signal. Many delay pedals offer pre-sets of strange echoing patterns, which is good depending on the situation (more so for experimentation as opposed to playing live), but for a delay that will be used a majority of the time on your pedal board, you will be hard pressed to find one better. I also like the Modulation effect, which adds to the dimension of a tone and particularly for lead playing and when used modestly (around 9 o’clock for both Depth and Speed).

EASE OF USE:
The Red Repeat offers upward of 600 ms of delay; and so, when you turn the Time knob up half-way you get 300 ms; simple enough. The Repeat knob indicates how many times you hear the Echo, with 10 o’clock producing a slap-back type effect (particularly with the Time around 10 o’clock as well). The Echo knob refers to the amount of echo mix – as you turn it up the echo is more obvious and louder in the mix. And so, you can get a very long echo trail, but barely hear it in the mix or more of a slap-back that is loud and in your face (to the point of over-powering the dry signal).

As with any good delay/echo pedal, the Red Repeat also has a Tap Tempo, so that you can match the Repeat and echo Timing to the beat of a song. When you use this feature the Time knob no longer is in effect (since you are controlling the timing manual). There is a little Manual Time switch that needs to be engaged for this feature to work. Likewise, there is a switch for the Modulation effect.

RELIABILITY & DURABILITY:
The Red Repeat comes in an oxblood red metal die cast housing; it has two metal foot switch (for on/off and Tap Tempo) with plastic knobs and metal switches. The foot switches are far enough removed from the plastic knobs that there shouldn’t be any mishaps. And the Manual Time and Modulation switches are located between the larger knobs. Likewise, the smaller Depth and Speed knobs (for the Modulation feature) are small and located between the larger knobs. The standard 9v 100mA power input is located at the back, as are the cable input and output. You cannot use batteries with the Red Repeat.