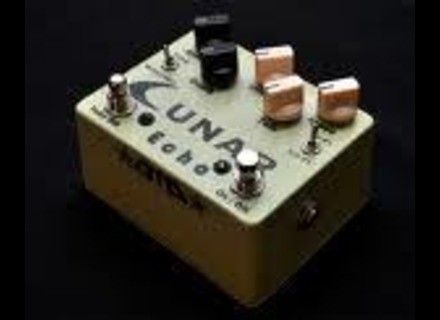 DMB Pedals Lunar Echo
5
This is an analog delay pedal, which is made by a really little-known company called DMB (not named after the Dave Matthews Band!). This pedal is an analog delay but has a few extra features that allow it to modulate and tweak the sound beyond just adding delay. It has a 1/4" connection and an input for a 9V adapter. As an analog pedal, it has no capabilities beyond it's typical function, and thus cannot be edited via a computer or a MIDI controller. It also is not rackable.

Using this pedal isn't all that difficult. There are five knobs, two black, three white, as well as two switches. The two switches are what make this pedal unique. One of them has three parameters, Tape, Normal, and Wrecked. This switches the sound of the delay to either resemble that of a tape delay, a regular analog delay, or a really whacked out delay that modulates heavily. The other switch changes between a hi-fi and lo-fi sound, which will adjust which frequencies are highlighted with the delay. The white knobs are Level, Space, and Tails, which controls the delay signal. The Black knobs, which are activated when the pedal is on tape mode, and are put into overdrive when the pedal is put on Wrecked mode, are for speed and depth (for modulation).

With all those tweaking options, this pedal has quite a bit of options in terms of sound. I really like it best with single-coil pickups and tube amps, as I feel they react to the warmth of the sound best, so my Strat/Twin combo is probably what I'd use most. I really like the regular analog delay, but I'd say the highlight of the pedal is the tape mode. With that modulation and tape emulation, it's just got a fantastic sound that's reminiscent of the late 60s, early 70s rock stuff. The switch between lo-fi and hi-fi also allows you to tailor your sound to fit your gears' specific needs. The wrecked mode is also really cool, but it's mostly just for effects and noises that aren't necessarily always applicable.

I like this pedal a lot. For such an unknown company it sure is a really nice pedal with some great features. For somebody who's looking to get the absolute most features out of an analog delay, this is something worth checking out. While the pure analog delay tone isn't my favorite, it's hard to really complain about it as it's still really nice. So definitely check this out if you can find it, they aren't that expensive and can really expand your sound!