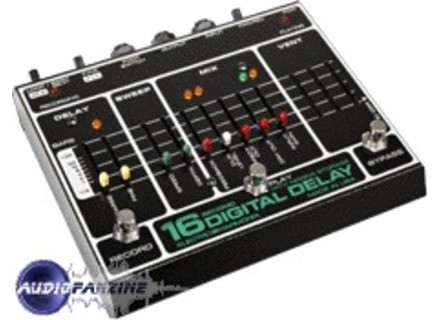 Electro-Harmonix 16 Second Digital Delay
4
This is a delay pedal, but it actually is really versatile and has many cool features. This pedal has the 1/4" input and output, as well as a 1/4" footswitch pedal (the controller is sold separately). The pedal is digital, and it does have MIDI controller functions. It can actually hook up to a drum machine, and the device itself can be used as a sort of controller (for some functions). The pedal also comes with a power supply. The delay pedal cannot be edited via a computer, be it Mac or PC. The effect is not rackable either. It also probably wouldn't really function well in a live rig, unless you are highly organized and have the proper gear with which to transport it.

Editing the effects on this pedal can actually be kind of complex. There are several faders that control each aspect of the pedal, and a few switches to switch between different modes. There is a control for delay, which controls the time and rate of delay with two faders. There is a switch that will make the change in delay time affect pitch if you want. Turning it off will keep all pitches the same regardless of delay time. This is a pretty amazing part of the package, as most delays tend to be one way or the other. The other controls are sweep, which basically affects the rate of modulation on the delayed signal, as well as mix controls which control the balance of the wet and dry signals. There is also a loop function, which will allow you to record multiple parts on top of each other. There is a button to record, which controls the loop function, and a button for bypass (both of which are foot-depressed). It's a bit hard to control everything, but it's easier to use than a separate delay and loop station.

This effect actually sounds pretty great for a digital delay. Most of those sound very artificial. While this doesn't really reek of authenticity the way an analog pedal would, it's still pretty clear and natural sounding (assuming you set it that way). The loop station effects are awesome. I love the fact that you can record a part at a certain tempo, loop it, and then change the tempo of the part. The fact that there is a switch that allows you to keep the pitch the same or change it as you change tempo is also amazing. The sounds that you can get out of this pedal while doing that are pretty amazing. The pedal is pretty good about not coloring the sound too much, which is another reason I like it. The fact that you can hook this up to a drum machine is also really cool. It's not quite useful in the same way that a shorter delay would be, but I do like the uses that this pedal has.

I think that overall, this is a quality pedal. As a loop station, it has features that most of its competition doesn't have. It's also really good as a more typical delay. I think that since it's a little bit expensive, this might only be for somebody who can trade some older stuff and buy this at a reasonable price. I think that there are cheaper delays and loop stations out there for less experienced players.
Did you find this review helpful?yesno
»

nours©'s review (This content has been automatically translated from French)

It&#39;s digital, otherwise it would not be called DIGITAL DELAY. necessarily.

It is editable only by her fingers, there is no USB port and does not even twelve o&#39;clock noon dumping. boo. but it is something quite different ...

Simple or basic connectivity: audio in / out, footswitch, midi out.

Standard format for this type of pedal Electro-Harmonix, large metal box with switch.

The configuration is far from simple. at first. after too ... but when we had the courage to spend one or two hours to tweak after is happiness.

Editing sounds is easy, but on stage it is absolutely essential to have in addition to the Foot Controller, unless you do play guitar with his feet.

The manual is clear, precise and detailed. screen printing is logical and visible, but it serves both the looper mode that mode delay and logically ... each knob is not used to the same thing depending on how it just does not care what the hell to beginning ...

Not very smart, but you get done.

The quality of the delay is formidable: its hot (although digital is pretty impressive - this is, all EHX pedals tend to have a warm, light saturation natural forces -), delay voluptuous, a real treat.
The duration of the delay is really interesting and can just as easily be used for casseroles for delirium funky post-rock sonic thing thing. really nice.

The chorus is not particularly easy to solve: it sounds well adjusted to hell, a little worse it sounds hot. it will take some time before finding the perfect balance.

The pitch, key change the tempo is really impressive. it&#39;s like on a computer, the quality is very good. however I still do not see what it can be used, except for berserk experiments, but it is a definite plus.

A pedal adapted to the interplay of guitarists, bass players but can toy with, of course! take care, entry level, especially with an active, EHX (such as the range) tends to saturate very quickly (but that grain! we can also problem-free, low guitar as to afford 0 euro more ... built a nice distortion).

Well, here I have not really talked about the pedal.

So since it&#39;s a looping sentences, must know that you can store up to 4 minutes (260 seconds so), in addition the animal remembers even turned off and unplugged (no batteries). there are two modes, overdub classic (feedback at the bottom), where it connects the loops to infinity (of 4 minutes for the Pixies, 4 minutes is endless ...), or no feedback, until we record a new loop (with of course the ability to switch from one mode to another in real time). little more interesting, just the feedback: you can wrap phrases, down a little feedback, replay, and there the previous loops are "mixed" with the level of feedback. practical and fun! the reverse applies and the chorus with joy (as well as Octave option for those who have the Foot Controller) on loops la My Bloody Valentine. for Cabrel, I do not know.
little definite plus of this pedal, the midi out: connect a computer or hardware sequencer and play it live with your rhythm or your favorite samples: just great. you can choose from the beginning the number of measurements of the loop, tempo, we pressed record, the sequence starts, is recorded, it is synchronous right call. happiness. you can also set the number of measurement mode infinite, and as a RC-20 for example, choose a start-stop. practice ...

The delay is in the best tradition of EHX: So hot. callable in rhythm, which is great practice. Attention cepeda flaw, or small important detail: the tempo knob indicating no data, the tempo is set to the feeling, given the lack of tap tempo ...

So obviously with all these extras, it has nothing to do with a Headrush (limited sampling, simulated tape echo and delay more than real no other options), or RC-20 (zero fx, just the closure) or the awful Jamman.

The sound is good ... the object is really fun and practice on stage for the little we control a minimum. The beast is still relatively expensive, especially food and Foot Controller, but it&#39;s still more than a foot loop or a delay.

Without thinking, I would resume the same (besides, it already), even if I&#39;m repeating myself, its approach is confusing, difficult and a little twisted ... but by my accounts, the year it still costs cheapest beer in a second guitarist, and the more it risks not to dredge the singer ...

yoyokitu's review (This content has been automatically translated from French)

- Difficult to use, how laborious but enjoyable once acquired! The possibilities are endless! It sets the number of measurements, record balance, the Bar is hop on hold automatically and records the loop, then another ...
The sound can then be modulated (change the tempo with or without changing the pitch, a sort of phaser and also incorporated)
- Essential for any manual dipping: the different knobs serve several different functions, or the complication of departing. C is confusing but it is sy ... And then it's worth it!

- In my opinion, one of the best samplers of the sentence, from intuitive point of view, despite its price and its approach a bit off-putting.
- Use with both guitar voice

- I own this pedal for a year now, c is a killer!
- I adore the intuitive and fun side, one can spend hours on it even by making all loops can.
- Negative: the knobs are not very accurate, especially regarding the number of measure and tempo ... sy but is also in the long run ...
- I do it again this choice with his eyes closed!