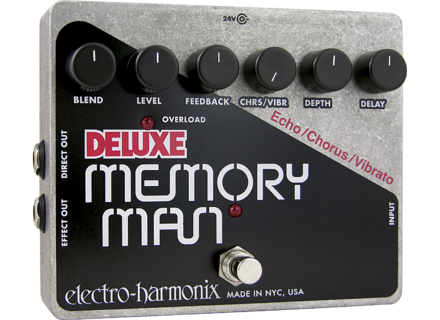 Eяяаtom's review (This content has been automatically translated from French)

Electro-Harmonix Deluxe Memory Man XO
5
the +
. tense rglage "blend", absent in the majority of delays (digital and analog)
. SETTING THE possibility of output level "level" (up to saturation of the signal!)
. sound identity
. warm sound, "natural"

matos1977's review (This content has been automatically translated from French)

We are dealing with a foot of legendary 70's.

Editing is not easy, but here's the point of the thing! We are are not in the presence of a box with two buttons, but a real musical instrument!

It must be to listen, analyze all the sounds, the modulation of the sound signal, to master the tool.

The manual is no substitute for experience: when buying a guitar manual does not explain how to play. Here is the same. Which is why the manual is about half a page to us to set the 6 knobs!

Editing sounds is great: Experimentation is the slogan! And sounds are simply mind-blowing.

Then there is the slap. I feel like I have some vintage gear that sounds! How deep, how hot, what a wealth of sounds. It's high quality.

I use the pedal with a Start equipped Mexican custom shop 69 pickups and it sounds!

I tried all sorts of digital delays (Boss, Korg, etc ,...) plans to mumuse, but here we are in the pure sound. Nothing artificial: that the natural warm and authentic: the foot!

The range of sounds is impressive. And you can play even after asking knobs his guitar to experiment with repeated sounds, and mix.

At first I was confused and disappointed. Indeed, reading the reviews of this product I had coined the idea that I get the sound right.

No! And that's where the interest of the thing! It's like a new instrument, it must adopt to be listening, gradually tame it.

Once you are back in it's done!

This pedal has become my favorite! (Ouch my face fuzz will beat me if I say that!)

After a year of hack I can confirm that it is one of the best pedals in the world! expensive but we understand why. You can then pair it with so many other pedals ... Every time hallucinating!

7 of 10 people found this review helpful

lepenvschirac's review (This content has been automatically translated from French)

I use it for a month now and I do not regret my investment is a killer ... The sound is really beautiful, deep and very clear unlike some pedals.

Viewpoint tone for my part that goes from vintage surf music (Beach Boys, Dick Dale ,...) to pink floyd or radiohead well recess U2.

While it requires time to adapt to find the sound that pleases and is not used all the time but when the opportunity is there to operate it throws two feet and drops like a bottomless canyon (I like the idea of ​​a bottomless canyon is a bit depth that gives this pedal).

In short a marvel worth its weight in gold.

4 of 11 people found this review helpful