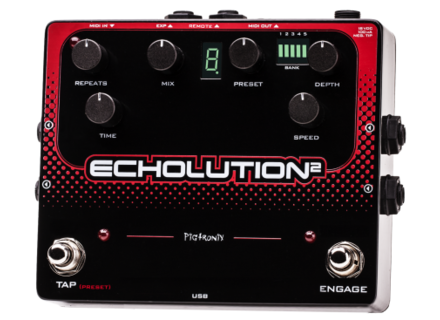 Pigtronix announces the availability of the second version of its Echolution delay/echo pedal, which is available in two standard and Deluxe versions.

The Echolution 2, which had been introduced at Summer NAMM last July (see this news), is now hitting the stores in two versions: the Echolution 2, with a simplified control panel and the Echolution 2 Deluxe with a full-featured command panel featuring knobs, buttons and backlit indicators. A two-button footswitch is also available in option and both models are accompanied with a software editor.

Both Echolution 2 pedals operate in stereo (two inputs and two outputs) and host a hybrid circuit combining Class A analog and DSP processing. You can use it with guitars and line-level instruments and control the effect parameters via the an expression pedal, envelope or MIDI controllers.

The stompboxes offer a 24-bit stereo delay line with a variable clock, in order to generate echoes which length range from 10ms to 12s and you can use subdivisions of this main delay to create polyrhythmic multi-tap patterns. You can then add multimode filters, LFOs, freeze, bit-crush, reverse or even create cascading octave effects thanks to the Halo and Jump functions.

Both pedals ship with 60 factory presets and you can store and recall your own presets via the built-in footswitches or the remote control pedal.

Plus, Pigtronix provides a Mac/PC software with which you can import and export presets, charge them with other Echolution 2 users, update de firmware and, for the owners of the Deluxe version, access the advanced features in real time.