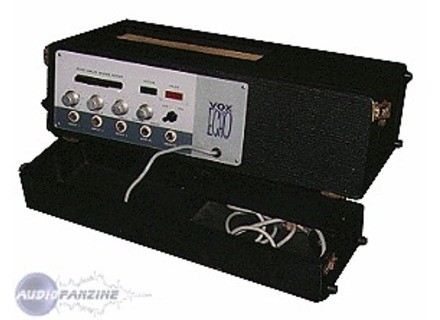 Vox CO2 Deluxe Echo
5
This is an interesting effect, and one that is really impractical to use in a live setting. However, for studio use, it can be really cool, and has been in use for some time, at least since the 1960s with British Garage Rock. There is no way to edit this piece of equipment with a Mac or PC, and there are no MIDI connections as it predates both of those technologies. It is an analog, tape-based machine which is interesting and increasingly rare nowadays. The effect is not rackable. The unit features three inputs for guitar or microphone (the microphone must adapt to the 1/4" connection somehow.) There is also an amplifier output, as well as a footswitch input.

Editing this effect isn't too difficult assuming the unit is working correctly. There are knobs for each input controlling effect volume and density. There are switches to control the type of echo that you can achieve, the types are labeled echo, hallo, reverb and repeat. The way that this effect works is that it records the intstrument to an endless tape, and then plays the same tape back at a slower time, resulting in the interesting delayed echo effect. I didn't see a manual so I can't say for sure how informative it is, though I'm sure I would have figured out this machine sooner had I had it in my hands when I needed it.

Actually using analog tape for this kind of effect is really unparalleled. I'm not going to insist that it will work perfectly for every echo situation, but I will say that sometimes it is the best option. This is mostly true when looking to emulate the sixties echo that the Dave Clark Five and the Shadows used to use (they are known advocates of this thing). I don't know how to describe it except that it is a spacey, trippy effect that really screams vintage. It sounds great, and there is really not much else that I can say about it.

I would say that because this thing is so old, it's probably going to run you a lot of money, even if they reissue it. I'd say that the reissue is probably the best way to go, considering the price, the likelihood of it breaking, and the fact that you can buy it from a trusted retailer (I don't know if Craigslist is the safest bet, since these things are temperamental at best and could easily be faulty). I'd say that you should really only look into this if you are a real vintage purist, I love it but I recognize that there are cheaper and more versatile effects that also sound great.

Other Vox delays/Echos/Phrase Samplers for Guitar