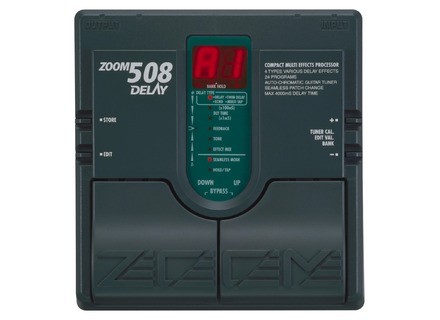 Zoom 508 Delay
4
The Zoom 508 is a compact delay pedal, similar in sound to the DL4 without the looper.  The pedal is a digital one, with standard 1/4 inch connections.  It is powered by either a nine volt power supply or battery and isn't rackable as it is a stomp box.

In terms of parameters, the Zoom 508 has a good amount of them to offer up.  You've got knobs for mix, repeat, time, modulation, and mode, which there are 11 of them to choose from, including the tempo tapping options.  There is also a switch for choosing between either tape, digital, or analog, as well as turning trails on or off.  If you're familiar at all with the Line 6 DL4, you can see that it has some similarities in terms of parameters, and I really view this as compact version of that pedal.  I've never had a need for a manual so I can't really say anything about it.

I have used the Zoom 508 with a Fender Telecaster and a Fender Hot Rod Deluxe amp, so I got a good read on what the pedal actually sounds like.  While the effects are definitely more than useful and are versatile, they do come off a bit too digitally enhanced sounding for my taste.

Zoom 508 Delay
4
Specializing in delays, everything goes: ping pong, multi, echo, mono. 4secondes up is more than enough. Taken to tap tempo, cool.
Built-in tuner, headphone amp ditto, very handy. A great option is offered, it's seemless change or delay the end rehearsals when we already plays a different preset, very strong and absolutely musical.
The organization of banks is malignant, it can turn non-stop on the 4 presets of a bank. I mean if I sound like spring reverb and delay its kind beautiful solo long and I put them each two times I have to worry about the preset number seen it go from one to the other indefinitely. Very useful on stage, especially with the seemless changes everything is done without a hitch.
Note that this pedal can not produce the signal effect, but not more than 50/50. It's not going in a parallel effects loop as a marshall tsl example.

Nothing complicated, but a lot of options. You can not adjust the level of output, or by global or patch, it's a shame.
I do not use this machine as a time to the next I forget how it works.

Bingo, it sounds great, absolutely transparent. The headphone is great too. The stereo is fantastic, a sacred drug as soon as we are tasted.
I mostly used with a scraper, electric, and rather full. For rhythmic wall of sound stereo I have no better, and ping pong in the light leave me a little dizzy so it succeeded.
The tap tempo is very useful, you can also assign the hold delay instead, which allows you to make mini loops (I quickly abandoned, much too stressful).

Bon ben is the only real delay I have, and I really do not need as much.
I can only advise on the basis of its qualities, but his real failure prevents its use in a parallel effects loop (like the process is not always present this problematic phase, and the resulting sound is downright bad) but most of the delay pedal is well. The Behringer DD100 not, making it the best choice for a marshall tsl example.
I found a artec analog delay which is excellent, cheap and totally satisfies me. 3 button and go, and that's what I want. The other reason is the paradox of our times: more and more distos, digital and overdrives are really good so to avoid having more than one conversion cycle / deconversion the analog delay is ideal.
However, the 508 zoom is a great delay.

Zoom 508 Delay manuals and other files