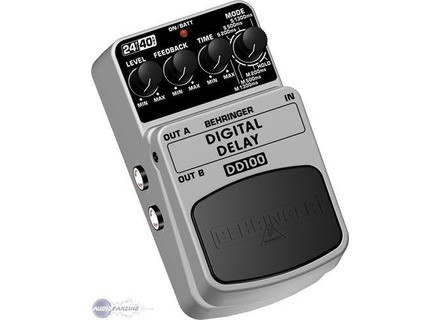 Behringer Digital Delay DD100
3
I play 6-string, 12-string, and bass guitar and harmonica. I have been playing harmonica for 38 years, guitar for 36 years, and bass for 24 years. I have played in a couple of bands but primarily play as solo musician. My musical style is a fusion I call "Psychedelic Country Gospel." (Think hybrid of Statler Brothers/Beatles/Buck Owens.)

I purchased this at Lanham Music in Saint Joseph, MO, to simplify my signal chain and eliminate/replace an Alesis Guitar FX which I have never been happy with.

While other reviews describe these pedals as noisy, I have not found that to be the case with this one. I enjoy having knobs to adjust to change the settings instead of having to adjust and store settings on a Multi-FX box.

The battery access is difficult to open when replacing batteries and is an invitation to damaging the pedal. A better designed unit would have the battery cover in the back.

The construction is heavy plastic--not as durable as metal, but heavy enough with a light tap of the foot. If I literally stomped on this it would not be a roadworthy unit. Fortunately, it is sensitive enough to respond to a light tap.

Not bad for a starter effect or for occasional gigging--but for the person who has to earn a living with their music, buy DigiTech or Boss.

Behringer Digital Delay DD100
4
Dalay pedal / digital echo.
Level connectivity is simple, in a (+ 9v jack) and a one out (mono) and b out (which has the permits to the stereo)

Buttons
- Level: output level at all, and output (s) of (the) repetition (s)
- Feedback: number of repetitions (when it is put in the kids, then a just one, it suits me!)
The last two are for setting the time before the note is played and repeated activation of the stereo (with out b)

Otherwise, I never tried other pedals echo / delay, so I'm maybe not very objective in the future ...

Bah ... we support it and it starts up, it réappuit over and turns off and goes into bypass. (Well I doubt whether a true bypass when you see what it does in series, but in the loop for cons is transparent)
the settings are fairly intuitive and fast.

Bon ben it does its job, need I say more, except that if I use it in series after the guitar, it adds a breath very boring, once in the loop, however, no more breath, as if nothing was ... So I use this config.
Apart from that (but annoying for old amps do not have loop effect) I have no complaints and I find great games for my bow: P

7 because the sound is breath Lorqui series is quite curious and may prevent the use of this pedal if there is no loop.
néenmoins pedal for 30 euros Thomann, next to what we see in boss, the report qualitée price is not bad.

I do it again this choice.
Did you find this review helpful?yesno
»

The computer that is tite this pedals, a little hard to follow the RULES when we say that bug! ^ ^ M'enfin bonn ... there are plenty of rglage to do conplet c

So let's say this because I am rather "I'll rpt xact ske you just play me", just tell me when and how. then the sound quality is excellent as it gives you back xact given your sound!
EDIT OF 22 APRIL, finally, when you start to get used to how to rglage can find the way steve vai reverb (well I do not want Corchi persson but it makes me a penssez ca) Juska the r ptition hell on I do not know how many seconds

So good fan of a band cho! bah go your way this is a rptiteuse pedals! c and all! you want her to vottre rpt with such and such a time card and bah you if you are looking for a clean perssonalit c rap but even it is in the pedals n ' a pa dfault!

Behringer Digital Delay DD100
5
First of all, buy Behringer in person at the corner store, the return rate is pretty bad result for their pedals and mixers.

I have not had any problems with this delay, except that he is ticklish issue alim, an Ibanez AC109 is required as always. I think a poorly filtered power supply or too strong can do messing severe, such as Danelectro pedals (Bebert a company).
That's the negative, the rest is very positive ...

Digital, two stereo outputs, but not (but very clever, you can have the 2nd exit untreated, with a slight delay, or exactly the same as the first exit. Very good for the image of two amps, very flexible as well), LED is dazzling, a real special effect by itself show what I tell you no.

But where this pedal is hard is that unlike all the delay pedals I've tested (508 Zoom, Danelectro pj & b, Jacques, SIB, and I forget) is that the mix of effect can be up 100p100. So great for parallel effects loop, the second entry of my bassman, active monitor in addition to the external amplifier to the best of both worlds, etc.).
This one is 10/10.

It's simple and effective, and versatile. The treaty does not sound much treble, not digital still sounds natural to donf.
Remains clean, which makes it easy to measure. No tap tempo, it's simple.
I did not find fault in fact, and I use it in parallel, because I keep all niaque of the amp. No worries either phase of a marshall, it's not often mentioned delays.

It sounds clean, free acidity, and as I used to wet the 100/100 loop parallel no degradation either.
In standard use and amp from scratch I have not noticed any other breach of the original sound or bypassed.
The rendering of two amplifiers is daunting in the manner you choose, it's really nothing like the sound barrier. J'adoore.

I since its inception three years perhaps, without any problem once the proper power supply used.
Bebert's another if you want to tap tempo, another if you like pingpong, and I'll buy the latest (EM600 echo machine) because it has the most awesome thing that is, a duck delay (see my opinion on the Rocktron Intellifex for kesako).

What is unfortunate is that their stuff is too often prone to failure, so it's a lottery. I have their reverb pedal as well, without regard either, but every time I buy Bébert I have some balls.
Another advantage of the parallel use, if you're in concert ben loose it does not matter you still have the direct ...

Did you find this review helpful?yesno
»
Read the 5 user reviews on the Behringer Digital Delay DD100 »

Other Behringer delays/Echos/Phrase Samplers for Guitar