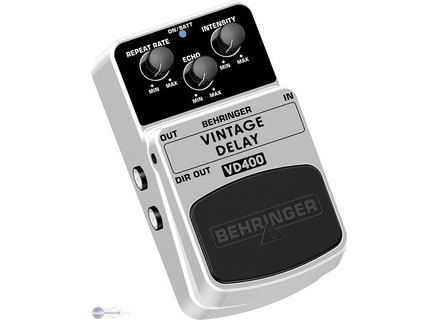 SlapKid's review (This content has been automatically translated from French)" Great!"

Behringer Vintage Delay VD400
4
analog delay, no codec here is the reason for my purchase elsewhere.
Delay time, repetition rate (feedback), and mix. The mix is ​​not only very wet, but can be stronger than the original signal.

9v boss format, and more direct output not tested yet

Must go to the ear anyway, it's very intuitive.
At max it gives a short delay of about 400ms.
A reverb effect is always audible.

This stuff is great, I've always connected before my amp rudimentary (one flight point bar) and it provides a nice ambience.
We can set it so that it is as well with as without distortion, which did not happen with other delays.

It's simple I can not do without, in effect delay distortion is predominant and it is rather clean the reverb that passes without touching the pedal.

It really does not affect the quality of sound that passes through, unlike pedals rems digital brand that break while bypass.

Slight downside, however, on my pedal input jack is a bit touchy, he clipped the plug 5mm over substance so if you plug dab as ben is no sound. Once adjusted it only creates more problems.

The blue LED is more green than anything else a lightshow m'enfin ...

A 30 Roros is already a plan of hell but it's staggering 20!

I have the EM600 and RV600, and the DR400, all with the modeling system and frankly Bebert VD400 puts them at his pate. Anyway I do not use it and then my ibanez DL5 beetles of the last century ...

rMy's review (This content has been automatically translated from French)

Behringer Vintage Delay VD400
5
There is a delay pedal any beast.

A delay of 300 ms according to the documentation.

Entrance, two exits (one without the delay). A jack for external power. I try not to change the battery (I have just one power supply sector) but apparently it's pretty boring.

The pedal has only 3 knobs (Repeat Rate, Intensity, and Echo) which did not name which I was used (ie, respectively, Time, and Feedback Mix).
The manual is tiny and in English, but more than enough (just to see what the differences are actually knobs).
Not much to do, very immediate and pedal.

So here we go down to business ...

To my delight found the characteristics of analog delays. I find it very musical, it is really far from the digital delays that sound alike (that being said I have nothing against digital delays, so it's just not the same). Here it's dirty, warm, vintage instead (hence the name <img class="smiley" src="https://fr.audiofanzine.com/images/audiofanzine/interface/smileys/icon_wink.gif" alt="wink" /> ).
The maximum delay of 300 ms may seem short to some but that's not bad, it covers a lot of cases, lining echos the sound of guitar in Pink Floyd or Radiohead doubling up, through a well slapback Messy as it should.

Another possibility, of course, put the pedal self-oscillation, which is always fun to do to get some nice effects and spectacular. Moreover in this connection, the knob intensity exceeds the threshold for return to self-oscillation when it is around 2, and it is not at once hyper progressive ...

I use it now since a few days.
I had not specifically tried many models, especially simulation of analog or digital delay / tape.

With the experience I do not know if I would do this choice, saying that the Behringer Vintage Time Machine (or obviously a Deluxe Memory Man ...) told me really well and buy this little delay pedal than I no cut envy.

Nevertheless, in this price range, there is very little competition (or not analog) and this pedal gives a real time sound very nice.

Basically if you want a lil analog delay for really cheap (I paid 28 € postage included) do not hesitate a second, I think you will not be disappointed.
on the other hand, if you plan to buy it because you drooling every time you see a Deluxe Memory Man, that little Behringer can not do much for you ...

Other Behringer delays/Echos/Phrase Samplers for Guitar