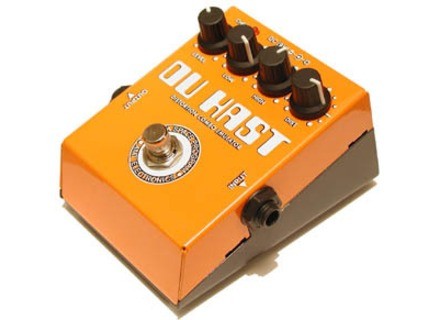 Du Hast, Distortion from Amt Electronics in the Classic series.

Amt Electronics Du Hast
4
This is a pretty basic overdrive pedal, but it has an interesting tone. There are no MIDI/computer editing capabilities. The device is made from analog technology, and its an update on vintage tones. This device has the simple 1/4" input and output connections, as well as an input for a power supply. It can also run on a 9V battery. I've only used this device with electric guitars.

This pedal is an absolute breeze to use. The simple, two-knob structure makes editing on the fly pretty easy. There are simply knobs for volume and drive (output level and gain). It's a pretty easy pedal to use, and it's easy to get good sounds as there really aren't any settings that sound bad. There's absolutely no need for a manual.

While advertised and labeled as an overdrive, I think that this pedal is actually a blend of overdrive and distortion. There's really no way that an overdrive should have the potential to be this heavy. Not that it's an overwhelmingly heavy sound, but it's a tougher sound than most overdrive boxes will give you. I'd say it's more of a mild distortion. It sounds good for lighter rock stuff, and actually has enough drive contained in it to be a great sound for leads, especially when being played over a relatively calm backing track. I wouldn't recommend it for a hard rock act, unless they need a lighter distortion for rhythms. Really rocking out, though, would require something else with more guts like a heavy fuzz or distortion.

I think that this is a rather cool device. For the folk-rock, country-rock, and blues-rock kind of guys who don't want to get too heavy, this is a really solid choice. I'd say that more often than not, I could find some use for it in my setup. I don't know how much they usually run. I doubt you'd have to pay more than 160 or so for it, after that you'd be getting ripped off. It's totally worth that price tag as it consistently brings quality sound. I haven't had it long so I don't know how reliable it is, but since I don't really gig with it I can't say for sure.

Amt Electronics Du Hast
4
This is one heavy pedal! The tone from this pedal is amazing. It has a very Germany heavy metal tone that is very rich and chewy. This pedal is not for the faint of heart of some pop music sensation trying to rock out. This is a full blown high gain destruction bringing pedal that will light up the speaker cabinet.

This is an analog pedal that doesn't have any midi attached to it. It will go on your pedal board very nicely with the angle that it has going from back to front. it is a little more bulk compared to a Boss or and Ibanez pedal. Think somewhere in the realm of a Big Muff but not as long or deep.

This pedal like all AMT pedals is easy to use. It has five control knobs that function the level, two EQ settings, and the gain. Each one does exactly as it read of the knob. The gain has a lot of distortion on tap and will be very wicked sound.

This pedal is a fun pedal to play with. It has a natural sounding distortion fitting for heavy metal players and drop tuning players. You will get a huge fat chewy tone with this pedal that sounds like a German amp company like Diezel or an Engl. It has that familiar grind to it that is immediately recognizable. It even has a hint of Mesa style grind in the gain structure. This is a pedal that will give you a solid wall of air coming form your speakers. Very awesome!

This is my second favorite pedal offering from AMT. The first being the Extreme lll which is just a voicing issue that I personally prefer. However, this pedal is just a great sounding unit that will have a thundering low end. Not really voiced in the upper midrange like other AMT pedals. This one gets a chewy thick lower midrange that stays pretty tight.

I would recommend this pedal to anyone on a budget looking for a thick warm German high gain tone. At new they come in at around $120 which is a great price for what this unit delivers. This is fun pedal to play as it just makes playing more fun and enjoyable.
Did you find this review helpful?yesno
»

Amt Electronics Du Hast
2
The AMT Electronics Du Hast is a &quot;distortion combo emulator.&quot; In case you haven't guessed, it's a distortion pedal that seeks to emulate the sound of the popular German band Rammstein. In fact, the pedal used to be called the AMT Rammstein, but I'm not sure why they changed the name.

It's got an input and output, battery clip (which requires a screwdriver to access), 9V jack, and four knobs, Level, Low, High, and Dist. Pretty standard for a stomp box distortion, and it's made in Siberia. Feels nice and sturdy. I like the orange color.

It's a simple setup with only four knobs. No manual, but none is needed. I like the fact that the stomp button doesn't click when you hit it. This might be a detractor for some who would like the feedback of a solid click, but I find that it makes the pedal much easier to switch. I wish more pedals had this kind of button.

I'm docking one point for making me use a screwdriver (and a fairly small one at that) to get to the battery.

Here's the thing I don't like about this pedal: I can't seem to get a good sound that I like from it. Reading other reviews, you would think that this pedal would be a replacement for any general-purpose pedal. In my opinion, that's not the case. It seems to do the Rammstein sound quite well, but I'm finding that this particular sound just isn't my style. And when I switch from another box, like my Little Big Muff, to this pedal, the box sounds flat in comparison. Even with the BBE Sonic Maximizer, no matter how much I tweak this pedal it sounds flat to my ears, compared to just about everything else. Maybe it's just the nature of this kind of distortion, but it doesn't seem to fit in with my other effects.

I also had a weird issue of getting a hum after playing with it and my other pedals for a while. It was only coming from the Du Hast. I decided to unplug it from the Voodoo Labs Pedal Power and try it with a battery, and the hum went away. When I plugged it back into the power supply, it was still gone. It hasn't returned, so I'm not sure what happened there.

This pedal is a bit noisy, too. You won't really want to use this in conjunction with a fuzz pedal, unlike some of my other fuzz pedals which can be stacked without a whole lot of extra noise. Overall, the sound just isn't what I'm looking for.

I have a love-hate relationship with this pedal. I want to like it. AMT is a good company that makes good products. And at times, I like the sound of this pedal. I think most people looking for a basic distortion would be well off taking a look at this pedal. But whenever I switch to another pedal, it just makes me feel like this pedal sounds flat and has no character. I just can't get myself to like it.

For the price, it's good if you like the sound, but I wouldn't buy it again, because it just doesn't seem to suit my tastes.
Did you find this review helpful?yesno
»

Amt Electronics Du Hast
5
See below, this is the classic

simple
setting ranges progressive and effective despite the beefy side this pedal. So full of sounds available in fact it is thinner than you might expect. Finally, it is a way of speaking, since the sounds that come out of this machine of death that kills ...
the absence of adjustment mediums do not miss, I have a amp that I corrected with the pedal, usually boosting outright serious subwoofer welcome ...

it does not crunch, it does not boost, ca seriously hard, but with a great versatility. the very large rock to any form of modern metal and extreme ...
works with all my guitars (single or double, with double recess better) overwrites ca still sound microphones, but what grain / gain!
on the other hand, as many good pedals, the result depends much amplification, your amp and interest cash out, especially in the lower floors and the gain and amp, oats severe ca. She likes the JCM900 a friend, but not the 800, and another 900 it sounds even better (probably another cab) on my blackstar is nickel. the cab is very important if you really want the grain value.
I never really managed to make it sound like it must be taken directly to sound card and simulator, but I réessayerai. I think the sound of this type of pedal depends greatly on a real sound system (like warpfactor for that matter)

this is my pedal to the kreu kreu, ultra efficient, love, cheap in secondhand, I keep ...
used for a year, I have lots of distos. in the metal genre, I HM2 (I love her for her asthma and skinny bee ...), I tried and resold warpfactor ...

Did you find this review helpful?yesno
»
Read the 7 user reviews on the Amt Electronics Du Hast »