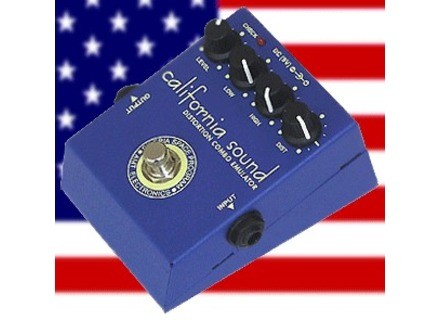 California Sound, Distortion from Amt Electronics in the Classic series.

Amt Electronics California Sound
3
This is AMT's attempt at a Carvin Legacy amp or a Mesa Boogie. Probably somewhere in between the two amps. This has a distinct AMT tone but in a catagory all its own. It sounds really good if you are going for that tone but in my opinion it doesn't live up to some of their other pedals.

This pedal is very easy to use with only four control knobs. It has a Level for controlling the overall output volume, a Low for the lower EQ frequencies, a High for the higher frequencies, and finally the Drive for the distortion and saturation. These are basically on just about every distortion pedal that there is out there.

There really isn't a manual needed since you really just turn the knobs until you find something that fits your personal taste and needs. The more you turn up the drive the muddier it does get though. So take it easy on the drive knob.

The sound is decent but not great. I personally don't care for the tone that it has. I like there Extreme lll pedal and their Metalizer pedal a lot more. The tone is a bit muddy overall and not that clear. I like the pedal to be a little more transparent where you can clearly hear the note separation which I don't really hear in this pedal.

Try this pedal with a humbucker style guitar with a clean channel amp. It doesn't have to be a Fender but something clean that has at least 3 gain stages but not overdriving. It will compliment the gain stages of your amp and push the front end very well.

This is not AMT's best offering. It does sound decent but they have better things in their repertoire. My personal favorite is their Extreme lll pedal. It has a ton of options to tailor a great sound in almost any application.

At new they come in at around $120 which is not a bad price. I would recommend anyone you need a decent rock or pop tone from a clean amp. This pedal will get you there pretty easily. Not a metal pedal and will not excel in dropped tunings but it sounds good for the rock and pop scene.
Did you find this review helpful?yesno
»

christophe17's review (This content has been automatically translated from French)

I work metal and shred to progress technically and not trying to imitate at all-so-and-so precisely. I have long sought a lead sound thick and well defined. I tried the Metal Zone (zzzzzz. ..), the Zoom hyperlead (more interesting), the Guv&#39;nor first model, the Shredmaster and the lead channel of my old HK tubeman first model. The Shredmaster gives sounds interesting, very colorful. But there is always a side fuzz in the treble, midrange and bass are muffled imprecise. The old tubeman has a clear channel monstrous jazz, blues great channel but the channel rock is too fuzzy for the lead for my taste. We must reduce acute and then you lose clarity.
In short I came across ads for the AMT on the net, and neither one nor two, I sell my Shredmaster to buy the California-sound effect of on-line, Zorros 103 including shipping. Two days later (yesterday) the first test. Level at 10 am, high and low at noon, dist to three hours and Blowin &#39;in the sound. The one has been ch ... searching for hours tinkering buttons, and stacking pedals (overdrive distortion over longer equalizer, etc. ...), it is Boy was there, live.

The gain level is higher than the Shredmaster. The bass is very punchy and defined, even if surrounded by a light fuzz. The treble is very clear, singing and most importantly, without this side buzzing of bees. According to the attack was a pinched his (near the bridge) or flute (middle of the rope), harmonics fart well, attacking hard enough to curl the note takes bite: you can really play on how to attack Note. The sustain is long, but the tail of the note seems swallowed by the noise gate. The agreements are readable, well-defined, can be in little soft without equalization. And rare, the intervals sound! You can make fourths and fifths of the race, but even second and third. There is no such terrible clash of high harmonics is meant a Guv&#39;nor example.
For versatility, is something else. Going up the gain in depth, the sound becomes fuzzy but still very usable, for against, means a separate breath when not playing. The noise gate is that it blows away the pndant jeu.En lowering the gain below half, it goes into overdrive. The agreements are punchy and quite dry. I prefer the warm color and rich sound of my Boss OD-3 for this purpose, at least in blues and classic rock. Gain to zero, we are already in overdrive pronounced too much for my taste for Ridchardsiens plans. By pushing the bass and treble at background, palm muting going very well, but we can not play on the rate of mediums to dig. I rebuilt on old rhythmic pleasure to accept. In short, it is especially tailored for high gain, a trend solo.
I have not tested live console or in combination with an equalizer or boosted by a preamp.
The building now: it&#39;s stamped metal such as old Marshall Guv&#39;nor, but much more light. The Silk-screen Printing is cute but seems a bit fragile. The switch is very flexible as foot class. on the other hand, taken to plastic jacks, nut included .... there really sucks. The Behringer and Danelectro initiated a trend to build cheap, which is taken up by other brands and it&#39;s a shame. That said, well placed on a pedalboard, it should hold on. The battery cover is inspired by the old marshall. It has good rubber pad.
My review:
The pros: the lead sound, smooth, ready to shred directly. the right price (100 euros). Noise gate built.
The -: building a little disappointing, blowing at high gain. Quite specialized.

With experience, I strongly recommend this pedal for any guitarist looking for a lead sound modern without taking the lead. One branch, we play, period. It saves time and work instead.
For against, the grain should not be paeut everyone. That&#39;s why there are other versions (and tweed british sound) and the disto station which includes the three. It looks to me like to be inspired by the principle of no amp gt2. I am almost tempted to euos 30 more to go to the station disto see if it&#39;s worth it.
To be continued ..... Christophe
Did you find this review helpful?yesno
»

J-mix's review (This content has been automatically translated from French)

Amt Electronics California Sound
3
Distortion from the East to ct mulate the sound of the west hill (we would have guessed!).
Mtallique case of good quality small format.
Runs on standard 9v power supply
Jack in and out of plastic

Not bad. Trs California actually. (Ouf..)
Trs well for the budding shredder looking for a sound "of the Manir."
Live a mixer and lowering the treble, you have a good sound for stunning recording. I use it prfre.
On an amp, I do not believe t, the gain becomes overwhelming with too much grain (almost fuzzy) and personally I do not like too much this type of sound. (Tests on a Fender Twin, a Marshall JCM 2000, a Roland JC120 and a Peavey Delta Blues)
In addition the absence of knob mdium is sorely felt, or to dig or to add heat.

I had the SansAmp GT2, it's more expensive but it's better like that.
I am critical but hey not bad for the price even when. If I had the pedals 15 years, would t happiness. Trs well live on a console.
And then ... after a few solos you think that sounds a easy in fact, a little flatter, has sent the ball and then a weary ears. Finally it is not enough to be a true lead sound worthy of the name, if you know what I mean. Lukather, Satriani, Vai and Van Halen played on amps lamps overheating and the pedals can not replace it. I sold it.
Did you find this review helpful?yesno
»

Amt Electronics California Sound
5
Small pedal metal, simple, cheap (69 € now online in E. ............ R.
But what a machine! ! ! It's absolutely amazing! ! !
One defect: the LEVEL is too sensitive in the first degree.
Otherwise, I'm amazed!
Equipment: Fender Stratocaster U.S. Amp Bugera 333 XL, and therefore this incredible TN FC.
I'm going to soon order the Extreme III.
I have a grip on YOU TUBE: type "geokermarrec59" and AMT.