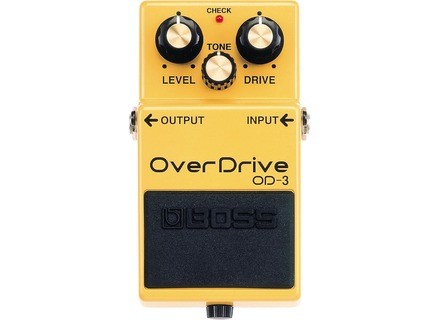 See all 51 classified ads about the Boss OD-3 OverDrive »

Boss OD-3 OverDrive
4
The Boss OD-3 is a pretty simple pedal in that it has three dials and they speak for themselves. It comes with a Level, Tone and Drive dial as most overdrives have. The OD-3 doesn't have any fancy toggle switches, mode switches or stereo out jacks. This is as straight forward as it gets. Comes with the typical Boss construction and battery screw in the front as expected.

As said above, this is a very east pedal to use. Just set the tone, Level and drive to your liking and either you like what you hear or you don't. The manual spells it out as well and I have no issues with the utilization.

The OD-3 has a very open and organic tone, which I like. It is definitely not boutique quality sound like a Suhr Koko boost or even an OCD for that matter. It is the kind of pedal you could and should put in front of a non modded Marshall for pure and simple 80's metal tone. After all an overdrive should complement the original tone of the amp, not color it too much. The OD-3 does just that and does it pretty well. If you have an already hot set up, the OD-3 will give you a bit more without sending the amp into uncontrollable squeals, although with the drive maxed it is possible. The sweet spot for this pedal is in front of an old JCM 800 or JMP with the gains at about noon. This pedal will give you that 80's roar with that little bit extra.

I think this is a great and simple pedal, no bells and whistles. The price for the OD-3 is about $78 new but you could grab one for $50 or under on EBay. At either price, I don't think you would be disappointed. It does what an overdrive should do; boost a signal that little bit to rise above the mix. If you are looking for something to take you into super-hot territory, this is not the pedal for you. Better alternatives would be the Rocket Fuel pedal by Majik Box or the Koko boost by Suhr. Yes these are boutique and expensive but they serve a different purpose. The OD-3 is simple and works well for what it is. Classic rock players should have one of these in the arsenal for sure. Bottom line is this is a good pedal at a fair price.

Boss OD-3 OverDrive
4
The Boss OD3 is very similar to the SD1. In fact, they're more similar than a lot of people lead on to believe. However, there are some differences. I mean, if there weren't, Boss (probably) wouldn't release two different pedals with different names. The pedal has your basic level, gain and tone knob. It's a FET buffered pedal with the ability to run a 9v battery in case you don't have any way to power this thing. Aside from that, it's pretty much like your standard BOSS pedal on the outside.

The knobs are laid out nicely, just like all BOS pedals are. The things are crazy tough, too. I once saw a guy hammer some parts on his guitar with one of these because he couldn't find his hammer in his toolbox. It was scuffed up a bit, but it worked. It's surprising how much abuse these things can really take. As long as you don't spill anything on them, they're pretty solid. Setting it up is simple, and there's no need for a manual for these things. Want gain? Crank it. Want more level? Turn the knob. Want a brighter or fatter tone? There's your tone knob.

The sound, as mentioned before, is very similar to the SD1. However, this pedal is a bit more on the vintage side of things. Where as the SD1 is a very strong boost that pushes amps into overdrive, this is a bit warmer and fatter sounding. It almost reminds me of a BD2 at times, but it's a bit different from that. It works great if you need to add some warm sounding overdrive to an amp, but I wouldn't use it as a primary distortion pedal as it won't have enough gain, most likely. It really depends on what kind of music you're going for.

If you're looking for a warmer sounding overdrive, check these out. They're really cool sounding pedals that are a bit different from the SD1 that everybody seems to run today. It's like BOSS's version of a tubescreamer, I guess. Then again, I guess the SD1, BD2 and countless other pedals they have are the same way...
Did you find this review helpful?yesno
»

Boss OD-3 OverDrive
4
I am a big fan of the Boss OD-2. I have always liked the turbo switch on the pedal. It mixed very well with a Marshall JMP and using the jumper cable. I wold get some great classic rock tones with that setup. This one is the newest revision to the overdrive Boss OD pedals. This one removed the turbo switch and went with only three control knobs like many of their other pedals. This one however has a lot more gain on tap compared to the old Boss OD-2. So therefore the turbo switch is within the sweeping control of the gain so you will be able to dial that turbo in with the gain control knob.

This is a great pedal to thrown in front of a high gain amp. You will get a similar response to the Boss SD-1 where the tone just jumps out in the mix a lot better. Those two pedals are very different voiced pedals but the reaction from the amp will be very similar. So if you like the way the Boss SD-1 sounds and reacts to your Marshall amp or whatever, you might like how this one does the same thing.

This pedal has a good sweeping tone that you can dial this thing into a good booster pedal by lowering the gain and boosting the volume or level. This will be good driving the front of your already overdriven amp. Or you can run the gain all the way up and get that pedal in front of a Fender Hot Rod amp and you will get some great rock tones.

At new these pedals come in right at around $80. which is a great deal on a very good sounding pedal. This is a good pedal for a budgeted consumer who needs to push his or her amp into overdriven territory. I would recommend this pedal to anyone who9 has a Marshall amp and wants to get a higher gain tone out of it. This is a great pedal for that.
Did you find this review helpful?yesno
»

Housed in the tough as a brick boss box.

There are not any confusing controls on this box which is how I think overdrives should be. Just plug in your cables, power it up, and go. The manual is fine but if you have ever used any other pedal then you don't even need to take it out of the box. Another great thing is that this pedal sounds pretty good with the controls all set to 12:00 making it very easy to integrate into your set-up.

I used (I sold it once I started building my own overdrives) this pedal in a guitar set up as an overdrive for my clean channel and also as a boost for my lead channel. As an overdrive I was very surprised with how good it sounds. Some of the other boss overdrive/distortion boxes sound plain and boxy but this one held it's own against much more expensive pedals. There is a wide range of useable sounds from light drive to a classic rock crunch. I really enjoyed the sound of the gain about 3/4 of the way into an amp with a bit of breakup. It really kicked the sound up without getting muddy or causing too much noise. Single note lines were fattened and chords retained their clarity even with the added gain.

As a boost in the typical set up of gain on 0, volume an 10, and tone around noon it really tightened up my distortion sound. The pedal cuts out a bit of bass similar to a tube screamer but without the massive mid hump in the EQ. Using the pedal like this allowed me to get more modern metal sounds out of mid gain amps. I used it with some orange and budda amps and was surprised how metal I could get them sounding. In front of my Framus cobra's lead channel it provided that popular clear, tight, compressed tone you hear on many current metal albums. The amp can do that sound on it's own but I preferred having it set more moderately and kicking this pedal on top when needed.

This is a great pedal and I think anybody looking for an overdrive should check it out before dropping much more money on all the boutique pedals out there. For the price, especially used, you just can't get a better option and it holds it's own against the more expensive stuff. If I ever get tired of my current overdrive I will probably pick another one of these up.
Did you find this review helpful?yesno
»
Read the 14 user reviews on the Boss OD-3 OverDrive »