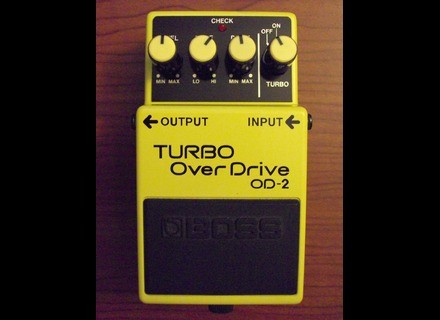 David Makowski's review""Two Overdrives In One""

Boss OD-2 TURBO OverDrive
5
I have own the Boss OD-2 Turbo Overdrive, the Boss SD-1 Super Overdrive, and the Boss OD-3 Overdrive. I play Gibson Les Paul Standards in my Marshall JCM 2000's. I use the Boss OD-2 Turbo Overdrive for my "Blues Rig" which is comprised of (2) Fender Stratocaster's and a Fender Pro Junior Amplifier. First of all I absolutely love Boss Pedals! Just like Prince I think they are the best pedals money can buy and they are and always have been excellently engineered and designed.
My Boss OD-2 Turbo Overdrive gives my guitar tone a really pleasant smooth Gain tone. When I play at home through my Blues Rig I have the level set at about 12:00, the tone set at 02:00, the gain level on (10), and I set it for Overdrive Mode. This sounds a lot like my Boss OD-3 only better because as other reviewers have mentioned the "Turbo" mode really lights up the Gain. It really is like having (2) OD's in (1) pedal.I find this pedal to be quiet at idle, harmonically rich, soft overdrive tone, pinch harmonics at ease, and good note definition. I would say it adds a great deal of sustain which is great. I play along to Black Sabbath, AC/DC, Thin Lizzy, and Bad Company records and this pedal can cover all of those guitar tones. The "pros" of this pedal is the "Turbo" mode. The "Cons" could be no remote with to toggle between OD and Turbo however I don't really mind reaching down to turn the Turbo mode on.
If you can find one I highly recommend this Boss OD-2 Turbo Overdrive.

Boss OD-2 TURBO OverDrive
5
The Boss OD-2 is a real workhorse pedal. It has been around for many years and has been used in many applications. They have been made all over from Japan to Korea and they were still pretty much the same. The pedal is your basic OD/Distortion pedal. It has the typical Level Tone and Drive knobs but it also has a Turbo knob that lets you switch between two selections. The pedal is powered by a normal 9v jack.

Boss pedals are known for their durability. These pedals are time tested and can handle the worst you can dish out on tour. The chassis is super strong and it is very easy to set up the pedal. The knobs are nice and tight and offer a good amount of resistance when you turn so you get a really solid feel. The pedal does not have true bypass so you may want to watch out. It may make your rig sound different even when it is not on. I think every pedal should have true bypass

This pedal can do all sorts of tones very well. It combines overdrive and distortion via the turbo knob. It is seperate from the gain control. With these options you can really dial in the exact overdrive or high gain sound you are looking for with this pedal The sound is great. You can use it as a clean boost or a high gain channel on top of your clean sound. Using as a dirty boost can give you great results. On top of an amp with a bit of gain on it you can really get a crisp sound with some more sizzle from the pedal.

The OD-2 already has many fans around the world. This pedal is a workhorse and has been found in many rigs and on many tours. The sound they provide is very good and can really open your tone up to new sounds and possibilities. These pedals can be found for pretty cheap too since they have made them for so long. There is no problem with getting one used since they are so simple and durable. If you are looking for a good overdrive and distortion pedal to expand your tone this is a good choice.

Boss OD-2 TURBO OverDrive
5
The first thing I would say is that I'm a natural amp overdrive kind of guy. I do not like using pedals to get my main sound. That being said I love this pedal. I picked this pedal up a few years back on ebay for around $50. It was Japan made as apposed to Korean which I have no idea what the difference may be. Others say the Japanese version sounds better and maybe they are right because this pedal is fantastic for the price.

Back a few years ago I was in a band that sounded similar to Jimmy Eat World or U2. I was a big Edge fan and I did a ton of research on his former and current rig set ups. I found out he had used this pedal back in the 80's for a while. Well I was on a quest to sound like him and $50 bucks is a good price to sound like the Edge....joking!

The layout is as follows...

Extremely easy to use and anyone can figure out within minutes. I didn't have a manual when I bought it since I got it used on ebay.

It took me about 30 seconds to find out that this pedal was very usable and user friendly. I always kept the turbo in the ON position. I think I read somewhere that Edge always had it on. So therefore I did as well. However, the On position for the turbo is where this pedal shines anyway. I would have my Gain up to around 12:00 ad the tone around 11:00 and the Level at unity level to my amp tone.

I was going for a classic rock tone so I had my Les Paul Goldtop and my '74 Marshall JMP. I would jump the plexi channel with a jumper cable and run this pedal and I had almost identical Jimmy Paige tones. It was madening how close I could come to that tone with just a simple setup. The coolest part of it was that it sounded like natural amp OD without the amp being cranked. I would run the Marshall below 1 for a clean enough plexi tone and this pedal in front with my LP. Classic rock all day long. This pedal really works well with a Marshall plexi or JMP. They just work and sound fantastic together.

I also ran this pedal in front of a Fender Hot Rod Deluxe with a Line 6 delay in between. Same result as the Marshall....just sounded great! It did feel more like a pedal in this application than the Marshall did but it was a great simple OD. And the pedal really made my delays brilliant and out in front of the band mix.

The thing I loved most about this pedal was that it did not sound like a pedal but rather natural amp distortion....at least the way I had it set up. And really for only $50 it was a no brainer to pick this puppy up.

I love this pedal. I think I would like to pick up another Japan made version someday. I would recommend this pedal to anyone who uses cleaner amps or now overdriven amps who want a lower volume distortion or even slamming the front of your dirty amp. Great pedal!!!

Did you find this review helpful?yesno
»
Read the 12 user reviews on the Boss OD-2 TURBO OverDrive »