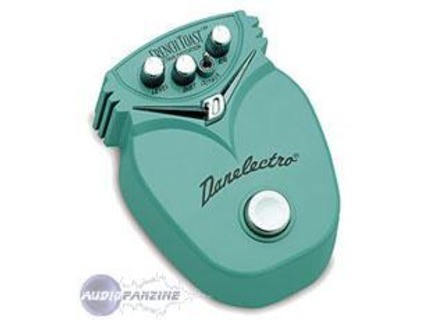 .Gwe's review (This content has been automatically translated from French)"A funny beast"

Outside:
Program: an input, an output (chouette!), a tone control called "EQ", said saturation "Dist" output level "level", a switch to activate the "higher octave", feeding 9V battery or power supply. A stomp of the most basic.

Inside:
It has a slot for a 9V battery ("square cell" for short), a little piece of analog circuit (including transistors) yes, but also large digital chips and a nasty buffer, less fun now.

All elements are fixed to the PCB during potentiometers (trimmers rather by the way, the caps are just pressed in), audio jacks and power supply. Only the portion of the switch that comes your big shooter splayfooted is on the case, whew! Because for the rest, the bindings on PCB is not what is more reliable, especially the screws that secure the circuit inside are not very big!

Well, the ear means straight away if the pedal is on, ok ... but a status LED is always welcome! especially in a large effect chain.

The screw head to open the cover to access the battery is not, and by not blunder, it tears the rubber that makes the underside of the pedal, and a few other things chiantes.

The sound palette is not very large, normal for a four-pedal settings. So, we quickly found his sound, even without a manual (it was still entitled to a pattern ...), but hey, this is quite normal on a pedal of this type, no need an encyclopedia, we play and tamper with in the settings.
The housing and aesthetics in general are nice, it&#39;s cute, it makes the pedal really endearing even, as many products Danelectro. Again, as often with the brand, the product is widely affordable and suitable for both a beginner that is looking at a precise sound.
The little box is quite ergonomic (but note, however, that its shape is not that it mat), and, well, quite sturdy. However, nothing beats a metal case with screw over all the elements: the screen is all the better.

The switch does not click under foot, it could be destabilizing, but what I do not like is that it is SPDT, ie that the pedal has a buffer. To explain the allergic electronics: when the effect is off, the guitar signal does not pass directly from the jack in the jack out (so-called true bypass), it passes through a circuit and undergoes changes / degradation, including its dynamics.

To be ugly, you could say that this "higher octave" is an unfortunate frequency peak garish and aggressive to our eardrums. But I will moderate this statement: it is possible to make good this pedal, according to the channel, the preamp and the amp used.
You can play around with the guitar volume, it holds up, but the race of Dist knob is rather irregular, not progressive enough early in the race, so we move too quickly sounds the least saturated and as the knobs are small, we will have turned a quarter of a millimeter to find a sweet distortion.
The tone knob to "EQ", cut too much, it acts almost like a band-pass and the result is too often shrill sound.
It has a rather unique signature sound ... BUT it is a replica of a good old vintagerie: the Foxx Tone Machine. This is where Satriani, Vai and even Seve, they played the Foxx Tone Machine. Good at this tiny creature still a good personality!

I use it for several months, but it&#39;s been that she is no longer in my pedalboard, especially now that I ride my own pedals, a pedal with a buffer no longer has a place, and given the width the sonic palette of my Fuzz Factory, I do not miss it.
I tested it with keyboards, nothing really interesting, especially because of the low bandwidth of the effect, because after treatment, all the bass is cut. For bass, it was almost great, but the problem is the same: no bass. I think the blow that it is a good pedal to change: change the input and output capacitors to make it a monster basseux, find the circuit for setting the tone change also, put them in a metal case, set a status LED, a true bypass etc.. Perhaps with feedback and a setting of "blend" it can do for bass. And suddenly, for a 20aine euros plus you get a really good effect, I think to try.

It has all its faults that make a real personality that is not to avoid, it is largely the road, especially considering its price. Try, if only out of curiosity.

The price / quality ratio is good, that being said, the price is right well studied.

(+) The limping
(+) Personality and signature sound
(+) The price of course

I bought it when I filled for the first time my pedalboard, but personally, now it is upgraded, I do find it more necessary, but I think she may still have its place among other monsters much more expensive.

fdvnz's review (This content has been automatically translated from French)

Danelectro DJ-13 French Toast Octave Distortion
5
It is a distortion, with a low-distortion.

The distortion is very frank, very clean, but nothing to do with a fuzz or a saturated amplifier.

It's really except for original sounds.

Danelectro is truly amazing in its design, the "mouth" of the pedal is nice, and his name is a joy. I put 10/10 for the success of a distortion that comes out of the box.

It's very easy to use, be noted that low, it is rather mono, like most Octavers.

I discovered recently, but immediately taken to complete my rack.