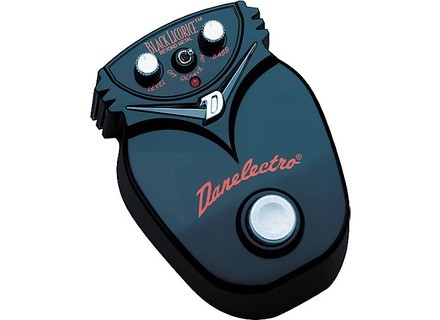 DJ-22 Black Licorice Beyond Metal, Distortion from Danelectro in the DJ series.

Danelectro DJ-22 Black Licorice Beyond Metal
5
I bought this in a little music shop in my home town,(big up JD), It cost be around £40 pounds which i think is around $61.

I like the whole DanElectro funk/retro styling so the actual visual appeal of it is very high, the distortion effects are truly "beyond metal" as it says on the box, they are heavy but dont lose too much tone definition. There is a switch that allows you to turn your guitar down a whole octave while still getting the super heavy distortion, teh battery lasts a while too.

Sometimes the actual button to activate the distortion is hard to get, its just a little awkward. Also i cant seem to find any power cord to work it except teh official one which sucks a little, but in general there isint anything major wrong with it at all.

The construction is a die cast metal ( i think) it is pretty sturdy (i drop it a lot) and it still works great. The buttons are plastic but thats fine they are sturdy too.

Overall its a nice little pedal with some really meaty distortion, it gets teh job done, well and it sounds great for all you metallica fans out there, but beware the crowd may sue you for going deaf.(thas how powerful it is)

Danelectro DJ-22 Black Licorice Beyond Metal
5
It is a type of distortion pedals down the black metal Coffee in the same brand, the diffrence is by adding a down octaver activated by a switch

The trs rglages are two simple knobs: level to the level of distortion and bass to make more or less muffled sound.
and an on off switch Brand: octave.

A good point by opening the pedals to put a stack, I glimpse that there had packed a ready to connect!

Connecting the pedals, VLAN!! Grosse disto very violent, a distortion mtal modern sounds, you move the knob on s'aperoit that you can really refine the sound impressive, ranging from a Heavy Mtal via its N omtal until his Death-Black, by activating the switch the sound becomes darker trs, even playing in the treble sound trsmdium sounds in a rhythmic sounds really dark IDAL to play the "Far Beyond Driven" Pantera, too bad we can not turn the foot!

Conclusion: it uen trs good distortion pedals mtal, cheap and above all interesting trs playing the bass level and we can really create his own sound!
The Down octaver works well and is trs trs effective and well-darkened sound, in the light pedals is for you If you are not fortune and love the big rhythmic vosu tr dark for 38 s because, frankly was not worth to miss out!

I would do without this choice, and especially more hsitation tt!
Did you find this review helpful?yesno
»

doll-boy's review (This content has been automatically translated from French)

Configuration of the simplest, a level knob, a bass knob and a switch octaves.
Just turn the knobs and quickly found his sought.
Small problem: playing, you can not activate the switch octaves.

Super, a small distortion muscular, clean or dirty depending on the settings more.
Used with an Epiphone G310, an ES335 Stol on a peavey bandit 112.
I do not do metal but rock, and I was looking for a heavy distortion a little more, well that's it !!!^^
The effect octave is pretty good although in my registry, I do not see much utility.

I received this morning.
I love the whole range of sounds offered by this little pedal.
I tested the marshall distortion, zoom, boss, ibanez and Danelectro suits me much more.
The value for money is really excellent, a nice little pedal with a very tough devastating look for a ridiculous price.
No problem, I make this choice without hesitation.
Did you find this review helpful?yesno
»