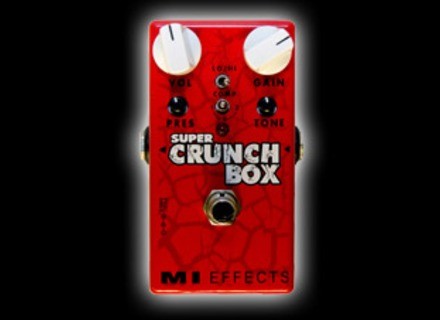 Mi Audio Super Crunch Box
4
Analog distortion
It is red, there are buttons, they can rotate, it's magic. Seems that you can plug a guitar top, it does not stop progress.
Ah yes, it's Australian. Who cares really, as it looks solid. And then I looked for a valve to do with it, but I have not found then we jump to the next chapter. Zou!

A large volume knob, a big win button, it should not be too complicated. Oh yes, there are switches (two) and pimples (also two) below the big. But what can it be used for? Mmmmhhh suspense is unbearable ...
Well it changes the sound, sometimes drastically:
- The switch lo / hi is the degree of saturax, it speaks for itself
- Comp the switch corresponds to the degree of compression, with level 3. Please note, in addition to sound itself, it changes the output volume, we can be very scary. When we know it gets better.
- The presence and the tone will play both on the tones, with a good range of action. Personally, I leave at noon.

Attention on the site Mi-Audio, the power supply is given to be positive center. This is false: it's classic negative center, as shown in the same box of the pedal. And that's good, you can use your standard power supply.

Sounds good, really. It goes from clean to overdrive a little mega saturation. With the right EQ, you can tu metal, it's not bad at all that.
Lo in position, it was bluesy sounds range knob, that's fine too.
Depending on the gear you put behind and especially when you put the gain well in the area, it may have a small tendency to fuzz effect I'm not a fan. Do not abuse the gain and play well on the tones so.
I'm used to big sound on models of our compositions, it does.
Note that tone knobs at noon and gain at 0, I found a small alteration in the sound, it has not appeared to be total transparency, but personally, I'm not a purist, I rock!

Used at home for a few days, plugged into a Mesa DC5 or a Torpedo CAB to model.
I have other pedals saturation, this one has its own personality, that's fine.
Store-bought in Paris, I could try it so I have no surprises. It is not too expensive, it is usable with a range of satu fairly consistent, it will perhaps join my pedalboard naughty!

tiep's review (This content has been automatically translated from French)

I enjoyed the presence knob, which allows it to adapt to the amp on which branch

The pedal is responsive to the volume knob, captures the nuances of the game

without the compressor, which I prefer, the sound is more open, and doing better in the mix

in all cases, gain in depth, it saturates still not bad

The sound is full, open, dynamic, thick without being imprecise

he must love the marshall grain, enough medium

Me, I love, and this is the pedal that guy who convinced me so far

it saturates much more than zvex box of rock (also good but more suited to blues and rock sounds typed / hard rock 70's), it's very organic and responsive to the game

I waited for a pedal of this quality long

ricoute's review (This content has been automatically translated from French)" pretty good, but not all .... config!"

Good construction, although it is a little surprised by its small thickness compared to other pedals but it is not too bad if you put it in the first rank of pedal board

no, not only for MIDI in / out only

the core is the volume knob and gain and tone

In addition, this version of "Super" a knob has a position lo / hi gain and position
compressor

So a priori quite possible amongst different settings between all

Overdrive and distortion effects are quite effective over the counter completes the whole.

Good results in terms of gain, although it is not intended for the metal and extreme.

Made for guitar and should be made that .... for that.

The problem is that a system (highly crystalline Fender) it goes in very bright with a tendency to side in a fuzz sound.

And, even with inverters "tone" and "presence" at its lowest setting, it definitely loses its characteristic grain and its qualities of openness and brightness, and it should better marry a less clear by Marshall amp ex ... Question association restitution.

So it is not the universal pedal, despite its qualities, I have not found enough body to return, at least in my config.

Therefore imperative to try because it is not so important opportunities versatility that necessarily arrange everything, so I thought a little at first!

The "compressor" function is useless for me (because I have the Empress Compressor much higher) but can help, who does not!

Actually, I did not keep, because I know my system, and a single use me enough to tell me that my config was not here, and it returns, alas in the box.

Most: the range of possibilities

The less the refund and tonal balance very focused mid / treble missing body and made a few high gain fuzz.
The knobs "Tone" and "Presence" would be like pus cream Volume and gain, because it is not too easy to act on those tiny buttons especially with big paws

R / Q / P is very good building made in Austria and extended possibilities.

I will not repeat that choice, since it does not suit me,
but I do not recommend it for all but

For the record, his cousin Mi n'buff Boost (boost / buffer) with 3 modes boost seemed more universal (and therefore much less critical coupling) and much more attractive with 35db of gain!

So beware of bad associations, and include in not too clear config in terms of tonal balance.