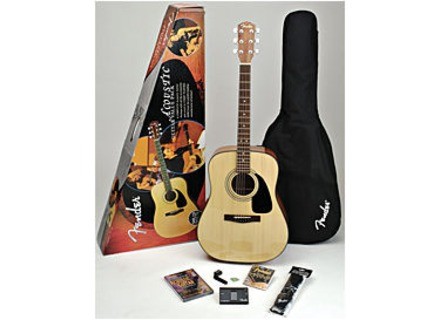 Fender DG-8S Acoustic Pack
4
I lost my Gibson guitar in a house fire aproximately 13 years ago. The Gibson was a 1969 arch top acoustic guitar. I missed playing and decided to buy another. I am quite musicly inclined and I am a brass player.

I purchased a Fender DG-8S at a local music store in St. Peters missouri. The sring tech helped me select this model over a few cheaper ones. Price 199.00 This after I searched around and found that it was well worth the money.

It was set up and checked out ready to go when I left the store by the techs. Great sound and good action. Smaller neck on the finger board that will fit my bear paw of a hand. superior face that will outlast the others.

I would have liked to pay less? No hard case. I am still living in the 70's where they all came with a fiber cardboard type case. I did not like the strap that it has in the pack. A little small for an adult I thought.

Solid construction and bracing. rosewood finger board not some painted surface. Nice resonating sound. Very rich sound. I do think the action is every bit as good as I need in an acoustic.

Great value. I could have bought on line and got it a bit cheaper but I would suggest like owning a good car, you need a go to guy and the location has one. This will last and be past on to others and still hold up well. My gibson lasted close to 25 years and sounded better at the end then in the begging. Good guitars made of quality wood just get better with age.

It appears to me to be constructed about like an old Yamaha FG 100.

The solid spruce top is the key.
The back and sides are laminated. Probably Sapele.

For 150 bucks including tax, new strings and setup (very slightly used) I had to take it. I play it every night.

I've had two Martins since '63, and believe it or not, I'm just as satisfied with this. It doesn't have a "butter" tone, nor does it sound like a Taylor, Bourgeois, Collings ..., but for the price it's perfect for me.

Fender DG-8S Acoustic Pack
4
I've been playing for 8 years now, and I play everthing from rock to Gospel. I've been in two bands, but now I just play at my church. I've seen several reviews on this guitar, but most from beginners who say that every guitar they touch is awesome.

I have 5 electric guitars and two acoustics, so I really didn't NEED a new guitar. I was in a guitar shop one day buying some strings when I saw this Fender hanging up with a $200 price tag. I played it and fell in love. I really didn't need the package stuff it came with, but it gave me some stuff like a string winder and DVD for my wife's 15 year old sister who is trying to learn.

I love the playability of this guitar. Sounds very crisp and very bright. I bought this guitar more for it's feel than sound. My Ibanez acoustic I feel has a better sound, but is nowhere near the comfort of this little gem (That goes without saying that I spent $400 for my Ibanez). This Fender is a quality guitar that is a wonderful bargain if you need a second or third acoustic. The finish is immaculate.

Keep in mind that I love this guitar, but there are several things I found troublesome. I didn't care for the black bridgepins it came with and bought some white ones to replace them when I changed the strings (Elixer lights). The holes in the bridge were too small for the new pins. Maybe only Fender pins were designed for this guitar?

The second thing is that I wish this guitar had just a little more bottom end. It just isn't quite loud enough for me. Don't get me wrong...GREAT SOUND, but I like a little more bass and volume in an acoustic.

I plan on replacing the light strings with mediums to achieve the sound I want.

Wonderfully built. I have no negative comments on the quality of the construction other than the bridgepin issue I mentioned earlier. Great neck, hardware, and the finish is beautiful, although my fretboard had a weird white powder on it which I've never seen on a guitar. Other than that, great guitar.

Like I said, I've been playing for awhile now and wasn't planning on buying an 8th guitar, but I loved it so much I had to have it. For the price, it is a nice addition...especially since it is a Fender.

I bought this at my local GC because it had everything you need to get serious and also had a good reputation. I played it for a while and ended up buying it thinking I was getting a great deal. At the time I was not fully aware of how much nicer guitars get as you climb the price range.

The first great thing is the value. If you can only spend $200 and want to get everything you need as well as a cool guitar, by all means buy this one. It's a very nice looking guitar that sounds and plays above its price.

This guitar is very mediocre. The first one i bought was defective. The second one i got gave me more problems. Friends of mine who play all told me it had fret buzz problems. The strap button (theres only 1 to begin with) came loose. The guitar allows the bridge pins to go into the holes way too far. The dvd is garbage. If you can find it in yourself to spend another 200 bucks on an Ibanez i reccomend it.

do not let my negativity discourage those of you who are set on a 200 dollar price range. for that price this is absolutely amazing, but if you can spend twice as much, do it.

This review was originally published on http://www.musicgearreview.com
Did you find this review helpful?yesno
»
Read the 10 user reviews on the Fender DG-8S Acoustic Pack »