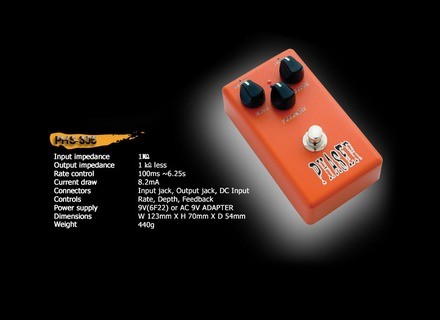 bo.vin's review (This content has been automatically translated from French)

Belcat PHS-305 Phaser
4
The case is metal with a connector on the rear
The battery compartment (fournie!) is less accessible by a plastic cover clip.
The plastic button seems less solid than the rest.

There is no manual but it's still a good thing as simple.

I would say that from what I had heard the effect is discreet, simple and effective.
The effect is not exaggerated to the point of hiding and play the guitar, I like. I played with the stato and with the ibanez artist.
The three settings are not gadget and make the effect within the limits mentioned above.
I bought a 59 euros

I bought the phaser last Friday after reading the article that said guitar from the well.
I made a repeated and two hours test at home.
This is my first phaser and I have not tried other models.
The value for money (if watched correctly is good).
I have four bosses effects (over 10 years) and a behringer tuner and I must say that it is intermediate in both in price and quality.
Did you find this review helpful?yesno
»

Belcat PHS-305 Phaser
4
Phaser 9 Volt and therefore all the usual fuss by contact against the jack is sleeping is always good to note.

A blue LED indicates power on and the speed has Ragit RULES.
A red LED which indicates if the effect is activated or not.

3 knobs, speed, depth, intensity of the effect in the mix.

Use only simple, three knobs is not very complicated.

By the cons there are two schools I think.

The effect is trs trs MODEL unobtrusive compared to a boss for example.

In short:
I was expecting something that is more important. on the other hand in its register of discrtion he trs well his office and give a touch to your arpges. On some ska riffs forget it's not bad at all to color and even on arpges as I said but it will not be for "the riff to" this is not the phaser that will give the characters to riff it just goes to the dimension.

In disto:
The effect is more Submitted while dpendra your amp to your sound, but I find it a little too loud, it is not made ​​I expected. This time we lower the rglages that the effect is less Submitted more ... But once rgl is not too bad.

In short an effect that would appeal to a phaser that seeks not too crazy.

It sounds trs well clear to embellish the sound but for fans of his dramatic go your way this one is too shy. It is used to give color but will not do the full particularity of a riff.

For that price is not too bad to have fun but if you really want a phaser into your sound it will put a little extra for a good caractrielle pedals.
Did you find this review helpful?yesno
»