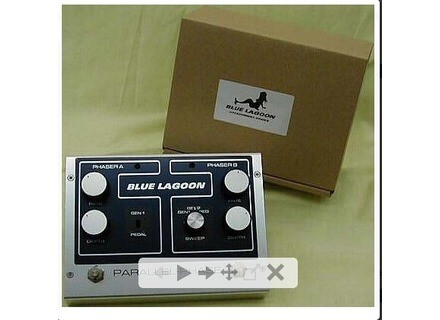 Blue Lagoon Parallel Phaser
5
The Blue Lagoon Parallel Phase is a vintage and unique phaser pedal that I’ve got experience using with electric guitar. It’s one of the only phase shifting pedals out there that I’ve seen that actually uses two phasers in one. I don’t own this pedal, but a few months ago used it at a studio where I was doing some freelance engineering at. It’s not rack mountable as it’s a stomp box.

It’s not necessarily hard to use the Blue Lagoon Parallel Phase, but there are some quirks to know about and it does take a little bit of getting used to in terms of learning how to get the best out of it. The pedal is split into two phaser sections – phaser A and phaser B. For the most part they share a similar make up, with phaser A giving you parameters for rate, depth, and a switch for gen 1/pedal, which changes the rate of the LFO. Phaser B has the same rate and depth controls, but also has a knob for sweep. Good luck finding a manual for this pedal…

The tone of the Blue Lagoon Parallel Phase is really unlike most of the phaser pedals that I’ve heard out there. Having the two separate phasers working in parallel fashion really gives you more possibilities than you would get with just one, especially considering that you’ve got slightly different parameters on each here. Beyond just having two phasers in one, it’s also one of the warmest and thickest phasers I’ve ever used!