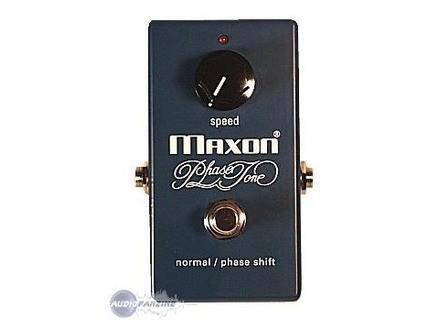 PT999 Phase Tone Reissue, Phaser for Guitar from Maxon in the Reissue series.

Maxon PT999 Phase Tone Reissue
4
The PT999 is an oldschool type phaser, basically like the old orange box from the seventies. I really dig the look of this pedal, nice color

It is a simple pedal although there are some tricks under the bonnet. Basically, you have just the rate control for the phaser but on the inside there are 2 little controls you can turn with a small screwdriver. You can set the Q and depth of the phaser. I checked them out but left them in the original position after trying to tweak it a bit. The little controls are set at the factory, not sure how they do it but the pedal sounds at its best with their suggested setting.

1 control, how hard can it be? Set the range and play away. It will get you a darker phase sound that is close to the orange phaser from the seventies. It's a fun pedal to play with. Although there are 2 small dials on the inside, I don't think the manual mentions them, I wonder why...

The phaser sounds great, I a/b-ed it with a bunch of others and really liked the sound. I was using it in my rack system, work just fine except for 1 thing. Switching the pedal on, or the loop in my case, I was losing a bit of volume. I tried rectifying it with the internal controls but that didn't work out. I could make the pedal sound brighter and then it would cut through a bit better but the sound wasn't as nice. I think there's a mod available for this volume issue but in the end I swapped mine for another phaser.

Small box, good rice, great sound. What's not to like? Well, the volume drop is annoying. If you can deal with that, this is highly recommended

Maxon PT999 Phase Tone Reissue
5
A small blue box with a single potentiomtre rgler for speed, a switch to turn the effect on a mono output and a red LED indicating activation, while analog.

Unless remove potentiomtre, simpler, there is none!
The manual provides three examples
- About 1.5 for 'phasing Subtle stamp to make your solo thick and smooth distortion in sound'
- 4 for 'best sound for phasing 60' beat rhythm play '
- About 6.5 for 'phasing Blues to add to overdriven sound'

Used with a strat sound is just beautiful.
As there is no potentiomtre volume of the effect, (I plug between the guitar and the amp), MAXON very well tag it is both pr feels DISCRT, clear and very colorful.
In addition we acknowledge my strat!
In its clean sound is absolutely charming in drive the effect is more Introduced more psych but still everything grable.
As against this phaser is East 'vintage', that is to say that mdiums find themselves more prononcs.
Unlike the MXR 90, it does not saturate phaser.

A small shadow presents is that if you turn the speed rglage button while the sound is active, the effect it was going o o we just put, there are going to gradually accelerates the speed does not, has changed suddenly.
It seems to me (vrifier) ​​the MXR 90 changes in real time the speed curve.
Regarding the speed (Speed ​​range: 0.2 Hz - 14 Hz), this Maxon turns slightly slower than the MXR 90.

When shopping, I hesitated with the MXR-90, I think, is he much (too much?) Introduced. I found a little too pronounced or the limit of the 'gadget'.
MAXON is really clear.
For 145 without battery, I do not know if I do it again this choice I regret no way but after about 10 months of use, I think it is better to invest in a mod with the advantage of rglages.
MAXON is really a very good reference number, especially in sound quality.
Did you find this review helpful?yesno
»

Maxon PT999 Phase Tone Reissue
5
This is an analog phaser made in Japan comes with a comprehensive manual reissue series and comes with a 9V lithium / manganese and a non-slip pad.

You feel like a king! And yet it is quite simple but most manufacturers do not.

1 only adjusting the phase velocity.

With a knob for adjusting the beast you master quickly.
It is in fact sufficient.

For atmosphere and solis is great, even at maximum it's still music.

I sometimes used Univibe by adjusting the phase to 10H and combining it with a tremolo subtil.C is stunning.

However it removes a lot of treble sound, which makes it very soft but if you have a sound rather saturated and there is an acute sense of loss of significant volume in the mix but it works well and happily.

This is a great phaser despite the fact that there is a setting I do not feel frustrated.

The only downside is that acute loss that can be annoying.

After having bought when I hear some competitors phaser I think they sound really cold and soft and it confirms my choice.

phanot's review (This content has been automatically translated from French)

super simple: a knob for speed
A second knob to the depth is not luxury, but there are other more comprehensive models; it is deliberately restrained.

great sound, very clean and great presence, but mild phaser and subtle. The advantage is that the Maxon phaser is always there, quiet but present.
True bypass, no breath
I use a warwick corvette bass, amp EBS HD 350.

I've had two weeks.
Before I had the boss: ph3 then a pedal bass WP6.
We would still like some more power in the phasing.
With experience, I do not know, but with the budget, I would buy the much more comprehensive maxon phaser.
Good value for money.

Other Maxon phasers for Guitar