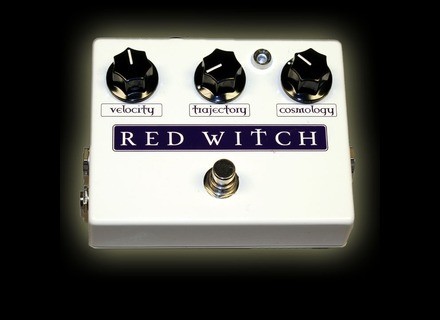 1 setting of "Velocity" (speed), one of "Trajectory" (frequencies) and one of "Cosmology" (choice of phaser, tremolo or the trémophase.

Speed ​​is natural is progressive but in reverse, understand by this that it is left it is at most (I guess it's like that in New Zealand).

The Trajectory is more difficult to be adjusted because it is more pronounced (on the right) plus phaser encompasses frequencies. It's a mix between in setting in depth and frequency to keep it simple.

The Cosmology lets us choose between
- 3 phasers: a neutral one with more resonance and another with more presence.
- 2 Tremophases 1 only after the manual but in fourth place you can clearly hear a tremolo. So one neutral and one tremophase more fat that can be mistaken for an acid vibe.
- 1 Tremolo: That I can not use. It's not a Fender tremolo, it does not replace a pedal and adds frequencies according Trajectory. Maybe to use in the room.

The sounds are good while being different. It is re-listening to some known I see the difference in style with the Red Witch phasers.

I plug in my last effects loop after the reverb and delay for "phasérisé" rehearsals and space, it gives my taste impression of greater spatial and also a pronounced effect but not as intense.

I use a Schecter 7-string, (I had to lower the gain of the Red Witch via an internal switch so as not to saturate) or the G & S-500 (tribute).

Unable to take in default.

In fact, if it has two default: no mix and no tap-tempo, which is nevertheless phasers on rare and those who have do not sound as good.

Nevertheless welcome Red Witch offering an effect that actually comes out of the beaten track but sounds in all cases by the versatility of its settings.