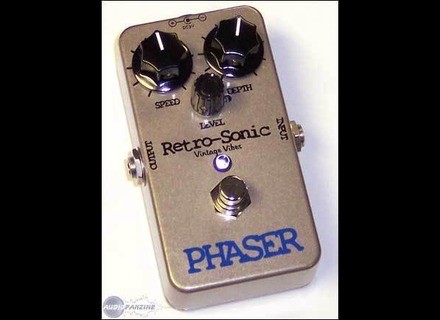 Phaser, Phaser for Guitar from Retro-Sonic.

Retro-Sonic Phaser
3
The Retro-sonic phaser is based on the old MXR script phaser but takes things a step further. It's an all analog pedal that has more control thanks to the Level and Depth controls. It has a deep phasing effect that can go from slow to faster than a typical MXR.

The extra level of control allows for better tweaking and more tones from this great sounding pedal. The reason I choose this one, was the level control. I tried a number of other phaser pedals and most of them seem to loose some volume. This was solved on the Retro-sonic with it's level control. You can easily dial in both old-school phaser sounds as well as more prominent modern tones.

I bought the pedal 2nd hand and the previous owner hardly used it. Much to my surprise, the pedal started acting up after a couple of months. I had it in my rack setup and was powering it with a Pedal Power and the pedal would stop working, sometimes it worked well for a while but then all of a sudden it crapped out. I got in contact with the company and they told me to ship it. In the end, I took it to a repair guy I know and he had a look at it. He was able to fix the pedal and discovered a design flaw. I'm not a technical guy but basically, there's something wrong with the electrical part of the circuit resulting in some pedals having issues. Eventhough he fixed my pedal and I sold it because I could not have a possible unstable pedal in my setup

I was using the phaser in a rack setup and really liked the tone from it. It had a nice deep pulse and I could get the volume dialed in just right. I gigged with it plenty until it started having issues.

When it was fixed, I sold it and replaced it with a HBE Psilocybe.

Tone-wise, it is a great phaser, I choose it over a bunch of others but it was a huge let down when it broke down. I have read from other pedal who had the same issue with this and other Retro-Sonic pedals so buyer beware!!

Retro-Sonic Phaser
5
Here's a Phaser largely inspired by the famous MXR Phase90 (same format) which had its heyday before being outsourced to Asia ... This is not the case Retro-Sonic uses quality components to deliver the phasers to its own 4 stages. I need to clarify that speaks of a pure analog effect ...?
True-bypass switch connector, power supply standard Boss (9V), input, output (mono effect).

The first setting is standard Phase90:
- SPEED controls the speed of modulation
The second setting, essential in my opinion:
- DEPTH controls the depth of the effect (ie, a change commonly performed on the Phase90)
Little more in the third button is not very common on clones of Phase90:
- LEVEL controls the output volume
Well, not mine, I found it very useful setting, it can be not to invade the sound spectrum when the other 2 settings are pushed or boost the sound if you want to hear instead the effect.

We find the characteristic warm tone of Retro-Sonic in which you can play "vintage" without the usual drawbacks, breath, crunches, etc ...
The phase effect is very organic, less than medium Phase90, more focused on low-medium, which can be a little overwhelming depending on its origin, where the value of LEVEL.

The speed is usable over its entire range of adjustment and allows correlation with depth, browse discreetly, or dive into psychedelia (without excess I said anyway).

Note that max depth, it goes a little start in the asymmetric modulation which, added to low-medium pronounced, is reminiscent of the Univibe. Personally, I find this amazing, and allows me to lighten my pedal-board of my Vibe a bit temperamental on stage.

For lovers of classic modulation, the Phaser be considered.

Today there are phasers that do everything with a multitude of settings, choice of the number of floors, etc. ... But it fits in its simplicity quickly, and adapts to all styles. With its large buttons it is easy to change settings on the fly, anyway there's no danger that does not sound good!

In short, I do not separate myself.
on the other hand I would not say no to a modulation pedal a little more experimental in this push these limits.

See all 23 photos of Retro-Sonic Phaser »