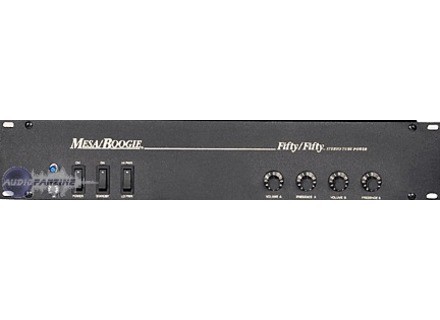 All user reviews for the Mesa Boogie Fifty/Fifty

Average Score:5.0( 5/5 based on 6 reviews )
Value For Money : Excellent
Not satisfied with those reviews?
Our members also liked:

Lvz77's review (This content has been automatically translated from French)

Easy to use although with some trepidation, this is my first tube power amp at that.

I play progressive metal with all that that implies as influences, coupled with Engl E530 and choice, a Schecter 7-string or G & l Tribute S-500 it sounds really modern.

That little drool, it's very clean and it does not forgive when we play badly.

Like any pre-amp is appreciated when you can push a little, maybe buying an attenuator would be to consider if you really want to enjoy.

400E used is a matter, sound and finish are at the rendezvous.

Perhaps a wider range of settings would be welcome, a switch of tone, for example, the presence can not catch everything.

Jgw's review (This content has been automatically translated from French)

Configuration is very simple, not worth a lot of settings on a power amp anyway ... Volume, presence ...

I'm not at my first amp, because I played a good ten tube amps, but with this amp I do not want to change! The sound of this amp is truly amazing!
I use a Studio Preamp with the same brand and as you say, these two machines are very very well together!

I use it for some time ... I can not remember exactly when I bought it ...
Issue price you can find really good deals (I bought mine for € 400, new lamps and not a scratch!)
At that price it's really an excellent deal, it still touches the holy grail of guitar .......... provided for use with a good preamp!

lagrelle's review (This content has been automatically translated from French)

It is a power amp so easy to use, it has a sound right away. Attention just to match the output impedance to that of the baffles.

I use this in a config Poweramp '100% Mesa Boogie:
- Studio Preamp, fifty / fifty and Thiele 1x12 cabinet 'with Electro Voice.
There is no doubt about it: just like the 2x90 is designed to play with Triax, the fifty / fifty gives its full potential with the studio preamp or the Quad preamp.
The difference with the Dynawatt 2x20 is notable: the most direct and articulate broader, less viscous, with a good dose of aggression and more.
In the clean fifty / fifty DYNAMIC TCP and brings brightness, saturation in the bass is simply incredible, monstrous gain

I'm very happy. I had the opportunity to test it before with a Rocktron Voodu Valve (not bad) and an ADA MP1 (made good), but there with the first studio, the ideal couple.

Connections:
- Between 1 per channel
- 3 outputs per channel (one of two 4Home 8homes +)
- Power outlet for connecting the unit directly
Rglage (all faade):
- 1 volume + one SETTING THE prsence channel
- An ON / OFF
- A pause button (standby)
- Low power button 1

The connectors and knobs are good bills trs.

One might well liked by a channel and a standy SETTING THE pramplication more ...

Usage is really simple trs. Basically, by volume, we can not play on the presence, so it is very easy to reach the optimal rglage just by turning the knob more or less. And it's not worse! Indeed, even when boogie done a good job because the correction is both wide enough, and trs prcise rpart well on all the action of potart.

As conserne manual, there's no more than 3 / 4 pages used. The explanations are clear, and 100% prsice practice.

I use the fity / fity with TriAxis for concerts and a Marshall JMP-1 for rptitions.

Sometimes I play ball, where it is both the bagpipes, as songs of variation on Franaise or otherwise, but I'm also from a metal culture, and in all cases figure, the amp gives me satisfaction. We'll even when careful to keep the lights (especially power) in a good state to keep niaque. In this regard, I urge the MESA 6L6 (420 or 430).

The sound is a little darker and hollowed from a VHT 2/90/2 (Mount in KT88). But the sound is the PRCI, dynamic, allowing a majority of styles ... and growls!

It ENTSO, as I said above, the lack of switch to change the sound as could a Deep, a modern or voicing ...

The power amplifier is a matress pice of string of amplification. I have not had it before normment (Marshall 8008, Marshall EL84 20/20 and Mesa / Boogie 20/20), but for having the four at the same time, I was able to compare and see how he had a definite influence ... so that the choice of HP and pramplis ...

I use it for just over two years.

I also have a comparrer 2:90. Without engaging the Deep or modern, the sounds are identical, but I find that the price diffrence between the two to nine (1100euros) is not really justified ... but 2:90 is when m I most comprehensive ...

It ENTSO:
- The impossibility to remove the power cable which is a shame for those who use a Furman power supply type ... it will cut the cable.
- A single standby for 2 channels ... t would clearly seen for those who only uses one HP (rpter for example ... even if only ESG no, the lamps on the other charges remain in ct ...)
- Low power switch that does not have a lot of action ... on THE FIRST half of the knob: 0 /
- No switch to change the sound.

A pure version a bit for the 2 * 50 Boogie from his great ERRF, the 2:90, but still an excellent choice compared to other brands in the same price range (around 1300euros nine)

Guillal's review (This content has been automatically translated from French)

I play death metal in the HxC ...
Insert in it, it was a clean hot!
Used with a pod that's really not bad, it gives the cot in the missing pod lampouille ...
Used with distortion pedals like the metal master or tk999 or DS7 ... This is a really good sound, lampiottes are for sth!
WAAAAA used with a lamp pramp engl 530 is the rvlation! The sound I was looking for! he sounds of thunder! The fameu big sound (the fameu

the single qute the Grail) that everyone is looking, well it's his!

I for 1 year
Most is its simplicity!!

But I have had opportunities to 1100 francs ... the bargain!

Mesa Boogie Fifty/Fifty
5
Mine is the 2002 version with chassis to revisit the war! The creature is made of heavy tle, although the mtal pais, ss air indestructible! The Mesa Boogie reputable not fail on this point. novelty are the two arati supplmentaires the front to cool the indoor transformers situs. In fact there are 3 indoor lamps pramplification type 12AX7 and 4 large power tubes like 6L6 situated horizontally rear, very easy to ACCS, and allows propose a rack of only 2 units when "Marshmal" offers the same thing in format 3 units by arranging the lights vertically (not smart a. ..). Another new one can also make lamps EL34 type by pressing the switch adquate situ the rear, just above the 4 outputs 4-ohm and 8 ohm outputs of the two. For rglages is rather basic: a power switch, one for standby, a volume knob and channel prsence and basta! That's my only regret that there is no more possible as the rglages 90:2 ...

The use is very simple! It connects or baffle (s) to the outputs of the amplifier ensuring not to be up the pole in impdances, it triggers the switch "power" is left heat lamps, one switch activates the "Standby "volumes are mounted, possibly the presence, and we send! the manual is clear and trs provides technical information trs INTERESTED who is who wants it!?! Dsormais we can say one thing it is bte as a power amp ...

For sound, has nothing do with my poor "Marshmal" 8008 transistors all ugly all ugly, wheezy wish ... Now we have a musical sound! Dynamic Submitted, snoring, my sound has changed my life with! The 2x50 watts are not the deception of the goods, a balance sacrment more than my 2x80 watt transistors Previous! We can shake the walls, I love! I guess the only dgts we can do with the version above 2x90 watts ... The key point is to have a cabinet below. My "Marshmal" flange REALLY sound. Discoveries I have the potential and took the vritable measurement capabilities of this amp only APRS his Deputy have a Mesa Boogie Rectifier cabinet for its growing "testostronnquot, (must invent words to adequately dcrire). In my view, do have a cabinet "Marshmal" for two reasons only: THE FIRST is that it's not a lot of tunes (very good reason! ) or that we possde dj amplifiers "Marshmal." Otherwise, turn to Mesa Boogie, Engl, VHT, Bogner et al.

How can we still play on transistor amps? Yet I had the opportunity to play a head Randall Warhead (a must Contents amplification transistors) and the sound did not convince me. For me there's something missing (and not just by the way) which is only found on amps lamps. Certainly it is more expensive but the investment is worth it. Friends guitarists, put your brouzoufs of ct and you could buy your amp lamps, there are only a real!