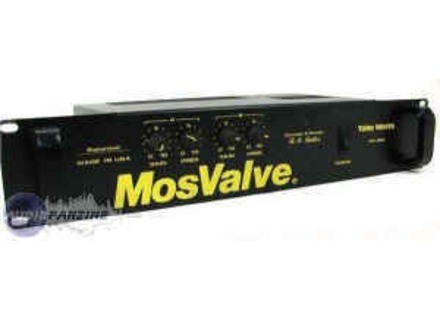 Tube Works MosValve MV-962
4
The Mosvalve MV962 is a stereo solid state power amp made in the late '80s/early '90s to offer a more realistic take on the tube power section in a solid state power section. Tube power amps are great, but are subject to the consistency issue of the air around you and how your ears hear them, whereas solid state gear tends to sound more consistent. They can also be quite heavy when mounted in a rack, which is another selling point for something like this Mosvalve. It's a stereo rig that puts out about 80 watts of power per side. Each side (A and B) has volume and presence controls available. I believe it runs at 8 ohms impedance.

Getting a good sound out of this power amp isn't difficult. I'm definitely a fan of the Tube Works gear, and this is no exception. Granted, I do prefer a real tube rig, but for what the MV962 is, it sounds decent. When I had mine I tended to run it about flat as far as the volume and EQ went, and just did my tweaking from my Mesa preamp as far as master volume or tone. One nice selling point for the Tube Works is that it definitely did have a bit of that tubelike compression that you really don't hear often in simulated attempts at tube tones. I hear it in their amps as well which is cool.

This power amp sounds decent overall. I used it with a Mesa Boogie Studio Preamp (basically Boogie's famed Mark IIC+ head in a preamp) and a cheaper Ibanez Tone Blaster TB412A angled cab with generic Ibanez "Power Jam" speakers. I got the rack rig as a package deal because I wanted to try out rackmount gear and compare it to the nicer heads I'd owned. I was definitely happy enough with the Mosvalve power amp for what it was. It certainly doesn't have the fully tubelike sound that one would get out of something like a VHT/Fryette or Mesa Boogie tube power amp, but for what it was it sounded good. I used it in a band setting for gigs and recordings and it held up really well for reproducing my glassy cleans and thick smooth drive tones accurately and clearly.

All in all I think the Mosvalve MV962 is a decent power amp to grab if you're on a budget and just want something simple that sounds great and consistent. They aren't made anymore but you can find them used for $200 and under all over the web. If you're a total tube purist you might not dig this, but for someone who just needs power, it's a great one to look into for sure.