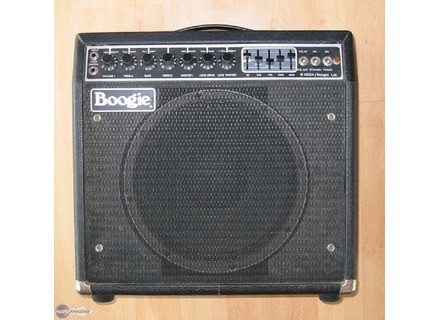 Mesa Boogie Mark IIC+ Combo
5
If there were ever a Holy Grail tone or amp from Mesa Boogie this amp would be it. So many people have search high and low for this amp and they seem today very hard to come by. Occasionally you will see one pop up on ebay or one of the forums, but it is far and between.

This amp has the most aggressive yet selectable tone ever existing in the Mesa line of amps. Many like the Rectifier for their over the top aggressive tone and meaty saturation. Others like the Mark lll the best like myself for the in between aggression of the Rectifiers and the Mark llC+.

Another reason why so many people love this amp is because it was widely known as the tone for Metallica. Since Metallica's reign upon the metal world they have been copied mimicked up one side and down the other. Since they ever increasing popularity, many guitars players have sought out after this tone.

Much like all the mark series amps you will see the control setting very similar to a Fender set up. Where the control knobs are on the top and the chassis is upside down. If you got one with the parametric EQ then you will find that most people will sculpt there slides in a V shape setting. This will knock out the midrange a little bit which was highly recommended by many users over the years.

Another thing with the Mark series the over use of the treble knob. Every Mesa Mark series i have ever played or someone I knew played always had the treble boosted a tone. I think the way the amp is made the treble gave it a bit more sizzle and gain when cranked up higher. This is just a theory though.

The sound from this amp is amazing! I find it to be a little more subtle in its aggression than say a Mark lll and definitely a Rectifier. However, there is a sweetness to this tone that those other amps can match. The C+ is such a solid built rock machine that since they released this amp...Mesa has then recreated its tones in the Triaxis and the mark V amps. To be the most highly sought after Mesa Boogie in the world I guess they would make a ton of money trying to relive those tones.

Try this amp with a a Gibson Explorer or a Flying V and you cant help yourself to bust out some Metallica riffs. You will need to pare this with either a Mesa 4x12 with V30's or the C90's to get the tone that made the amp what it is. The combination of the two will blow your mind.

This is the most perfect amp that Mesa has ever created. The most sought after tone and the Holy Grail of the company. Many have searched for this amp and have searched a long time. If you ever get a chance to get one I highly recommend picking one up. If you do find one they are generally priced around $2500. That is a used priced because they are not in production any more.

Mesa Boogie Mark IIC+ Combo
5
The Mesa/Boogie Mark IIC+ is the most coveted amplifier in Mesa's line up. It's an evolution of the IIC, which was an evolution of the IIB, and so on. It has various features such as Simul-class operation which allows you to run EL34s and 6L6 tubes at the same time, a 5 band EQ, reverb and head size. The amp also has an effects loop which I feel is a must. Thanks to John Petrucci and Metallica, this amp gets ridiculous money on the used market.

Mesa did an outstanding job with this amplifier. The EQ on this is not a normal EQ. You'll want to dial in the bass probably close to 0, crank the treble around 8, put the mids around 5 and the gain to taste. The manual describes all of this in detail, so don't worry. If you have the one with the 5 band EQ, and I highly recommend you get that one, put it in the classic V shape. The amp has tons of mids, and this helps keep everything sounding big. Don't worry, it still has enough mids to cut through.

This amp sounds phenomenal! Seriously, there's a reason why there's so much hype regarding this amp. It really does sound that good. The gain is huge and 3D sounding, the amp gets a buttery smooth or aggressive, bitey rhythm, all depending on how you dial it in. A lot of people recommend Metallica's Master of Puppets album, but I recommend listening to Dream Theater's Metropolis Pt.2 or Six Degrees (except for A Glass Prison. That was a rectifier). Those really display the true tone of the IIC+, in my opinion.

Seriously, if you can afford this amp, get it. Be sure to get a fully loaded one. Some go gaga over the export transformers, but I wouldn't worry about it. Although the amp does cost quite a penny, it seems to retain its value for the most part. You won't have to worry about losing money if you ever decide to sell it. If you can't find a Simul-class one, at least get it with the 5 band EQ.