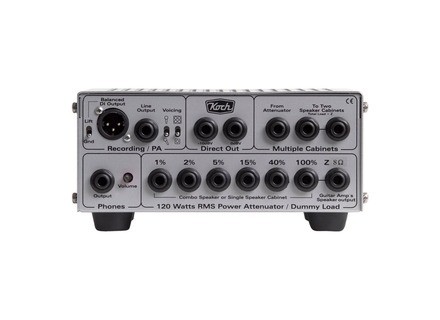 Koch LB120-Loadbox II
5
I use it since 2008. I bought a VOX AC H1TV. I got totally fooled by the power of the amp. Can not do without like cruncher as to vibrate the walls. So I had to find a solution.
I have not tried other models.
there is a version 16 ohms and one 8 ohms. On the device include:
direct output section: amp simulation (with two types of micro orientation and 2 types of firm) / pure DI (0-10db) / headset with volume (which I do not utlise ...)
a section for output on a second HP (note the sum of the resistances) and
6 attenuation levels available: 100% - 40% - 15% - 5% - 2% - 1%. I usually use between 15 and 5% (note I'm pretty well insulated home). 1% it seems to me that the sound of the amp is still a bit distorted.
What I like most: ease of use, the possibility of having a second output with speaker simulation (I made a decision on the HP amp with a SM57 and a socket with the simulation) j ' records often both.
what I like least: having to unplug the amp to change the level of reduction.
value for money seems to me excellent because it is clearly a machine built to last. plastoc not cheap by any metal is very heavy.

reybtom's review (This content has been automatically translated from French)

Archi simple, and you plug it work

The sound of my amp (Mesa DC-5 Head) is very well respected for the part and the output attenuator simulator HP is very good, plenty good enough to record demos

I've had a few weeks
By far the best attenuators and also much more than that. The sound is very transparent, the number of outputs allows many connection and the simulator output with HP's settings and angle of the microphone body 1 or 4 HP bluff is made
I bought it new less than 350 euros on the web and at that price the quality / price ratio is perfect
Remains to be seen wearing the lamps in use. One can also regret that it is not multi-impedance, but if you are on to keep his amp head for a while, it's not a concern
Did you find this review helpful?yesno
»

Koch LB120-Loadbox II
5
Everything has been said.
A rather unfortunate thing is the mitigation system. A rotary switch would be easier to use a series of outputs (100%, 40%, 15 %...)
Too bad we can not also change the input impedance.

Otherwise, no complaints, solid construction, it is quite comprehensive and it does not heat.

No problem. It's easy to see how it works. It is still advised to read the manual (comprehensive) to make no nonsense and slam the amp head. He does not know French, but everyone can not be grown and then the books, it often speaks Portuguese.

The machine is very transparent. He does not eat the treble and the dynamics, like so many attenuators. on the other hand, although it does not heat, I have some doubt about its ability to collect 120 w. I took the test (120 head thoroughly, thoroughly mitigation, he did not, he was producing strange sounds. But this is not the goal. Most of the time, simply reduce to 40, 15% have an excellent sound. Otherwise, to change the amp.

Without reaching the quality of a microphone before the hp, the output is excellent emulated. I use it often transplanted to the stage. More feedback problem and I am confident that the audience does not perceive the slight loss of quality compared to a microphone.

I use it for a year and a half. It's expensive, but it's very solid and it has a line out, emulated output and this is Loudbox. No need to practice then. Since I have, I wonder how I managed to do without it. This is an accessory that is needed quickly. If we could change the impedance as the Marshall (but who eats the sound), it would be the total growing stock.

Ironie's review (This content has been automatically translated from French)

Koch LB120-Loadbox II
5
Attenuator / dummy box analog rack by adding a power (the fan is already in, but not food, fortunately we do not need rack when not!).
Headphone out, line and XLR input jack.
A speaker simulation or 1x12 4x12 to choose. Choosing the position of the microphone (either right or diagonally).
Too bad that the impedance is fixed, fortunately my two amps are 16 ohms!

Manual in English, I almost make a connection error the day I received it, thankfully a friend has turned me, I do not know what were the consequences, but otherwise it is very simple as it know where the exit is and where is the entrance).

I do not use that loadbox, connected to a mixer. The sound is simply stunning, never heard my two amps sound as well as with this device! (I've never been able to push as thoroughly as we should say

I use a Peavey Classic 30 and an Orange Tiny Terror. For concerts I take only the small Orange in its carrying case and shoulder strap I put in my bag loadbox the guitar is very easy to transport, to the sound that can be drawn is a great setup!
Sure, on paper from a Pod or other simulation / preamp with 20 amp models and it does not effect the weight, especially considering the price, but when has an amp lamp is inimitable sound, I much prefer playing with loadbox with a cabinet because I can edit sounds better.
I plug all these people in my mixer and my PC, we get a quick sound of professional recording! And all this with headphones or low volume!
I bought used on this site for € 250 on the advice of a member of a rival forum, since I have noticed a renewed interest in this material, there is evidence 3 months (date when I bought it) there were 3 ads for selling this equipment, there are now two ads of people looking to buy a new one! I think it had to the fact that this material was too little known but it appears in voice rehabilitation.
I would look to acquire one second because I can not connect my two amps simultaneously on my loadbox only, through an AB / Box to play on both at the same time this should be a treat! But the ads are becoming rare as previously stated, we must be patient.
A set of all the hands of enthusiasts gear!

PS: For use in attenuator, do not forget to use a speaker cable between the amp and loadbox and between loadbox and baffle.

Did you find this review helpful?yesno
»
Read the 5 user reviews on the Koch LB120-Loadbox II »