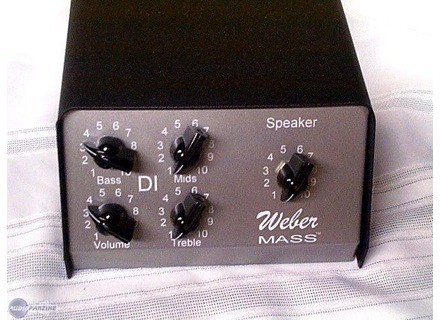 Weber Mass
5
The Weber MASS (Mobility Analog System Simulator) is an attenuator designed for use with electric guitar amplifiers. It should be used with tube based amplifiers, as it allows you to use a tube amp at full power without needing to have the volume at full blast. As you can imagine, this is useful in all sorts of different situations. Having an attenuator like the MASS is primarily something that will be used in the studio, but is definitely helpful for a live show as well. I however have only used it in the recording studio in tandem with a Fender amplifier head. Nothing can beat the sound of a Fender tube amp when cranked at full power, so having this in the line to do so while not having to have the volume up all the way is a beautiful thing. The version of the MASS that I used was a different one than in the picture above, and it was the 100 watt model. The MASS comes in a few different watt sizes, including 50 watt and 25 watts for using this type of thing with a smaller amp. Beyond the wattage, I don't think there is a difference between the modes. As far as parameters go, the MASS has knobs for bass, middle, treble, and volume, as well as those for impedance and speaker volume. It also has switches for tone bypass, a treble booster, and to choose between either a high or low range. AS you can probably tell, the MASS allows for a good amount of control over your sound beyond what your amplifier will give you, which is always nice. It goes right in between your amp head and your speaker or can be used with a combo amp as well. I've only really used one other type of attenuator like this, which is the more expensive THD Hot Plate (the 8 ohms version). Although the THD Hot Plate is a great product as well, I'd recommend going with the Weber MASS based on price alone, as they really do the same thing and there is a significant difference in price. I don't even think that the THD Hot Plate is overpriced, I just think you're getting a great deal with the MASS...

Weber Mass
2
Used for several months to calm the ardor of an Engl Powerball. The Weber Mass are powersoak / DI manufactured to order the unit (via their website US), with a lot of options, 50 and 100 watts, Mono, Stereo, various imp dances, etc..

Operation differ in appearance from the Marshall PB100 "PowerBrake". The PB100 converts electrical energy into heat. The Weber sends the overflow of HP a little tough.

Sound: b'en powersoak in, the sound has a bit more dynamic than simply playing with the volume knob on the amp down donf. But the flip mdaille, the sound is really deaf, too cushioned. O On the purchase of the option treble boost (bte a switch on / off, not a knob). Totally unusable: we are left with a burnt fat of acute unbearable, the sound becomes totally ridiculous and dnatur.

The volume knob is the Mass of the notches, it is neither linear nor progressive ... bofbofbofbofbof.

I had a Mass before the PB100. But the kind forumers who have AF of the total dtruit PB100 (does not meet the sound of the amp, blah), and having to port GMON the Weber Mass, I made my sheep. Mouaif. The PB100 does not vibrate btement he did not have all these gadgets, and less deadened the sound.

Finally, for now, the best way I found to silence the sound of an amp, it's either turn the power tubes (being super careful, eh!) To be a bte p dale volume in the effects loop ...

B'en I think the note back frankly. Following tests on Nonconformist Pod Xt in its pure juice simulation Engl head, and since I'm starting to put me over srieusement computer music, I finally test the ct friendly at Mass , its ID (that is by reading the thread Nonconformist that I recall of the DI intgre).

As function Powersoak / Loadbox a spirit is not as maddening as I n'esprais nothing of the DI.
With its volume, its passive EQ (Treble, Mids, and Bass) are not too bad happens to work its sound, since the head grows a bit (powersoak) and volume decrease gnral toc (loadbox, in order to have sound in his monitors).

The output level is rather feeble (a must also come from my sound card mrovingienne guides and more games computer music).

But the grain of my Powerball is not good enough respect.

Unfortunately, whether in use as powesoak DI, I have no t satisfied with the Mass: its not enough respect not as good trs DI.
Flipflaps eBay. Resold.

See all 5 photos of Weber Mass »