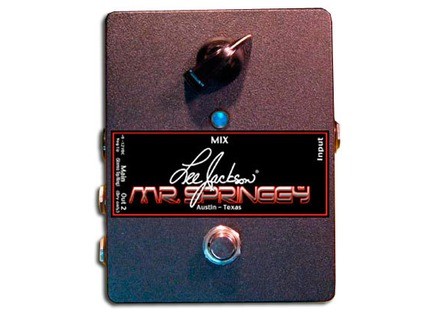 Only one knob controlling the effect mix, no need for a user's manual.
Some people like units having few settings, others would prefer to have the possibility to control the time and feedback parameters.

The sound is very authentic as if you would have a real Fender spring reverb. It can't be compared to the pathetic spring effect of a Boss pedal and it's more authentic than a Holly Grail, which has its own sound character.
Important point: neither signal nor volume loss.
A sound sample is available on Lee Jackson's web site.

I've been using it for 6 months. I previously had a Line 6 Verbzilla, a Boss RV5 and a Holly Grail.
I like the sound and the faithfulness to the original signal. I love that the unit has only one knob (less is more).
The value for money is ok.
It's rather expensive but cheaper than a T-rex for example.
I hesitated for a long time between the Springgy and the Van Amp Solemate which is bigger.
Maybe the Solemate will be my next purchase.
Did you find this review helpful?yesno
»

Lee Jackson Mr Springgy
5
No excuse artificial, she wants nothing to emulate: it's just a reverb, a good reverb.

It can not be easier. No frills, no fuss.

The sound is warm, I did not notice the aggressive sometimes found in digital effects.

This reverb replaced advantageously HolyGrail in my pedal-board. Set for trial in 2010 ... it is still there!

lifo's review (This content has been automatically translated from French)

difficult to get any easier. A threshold knob for more or less reverb

Very effective. An effect that does not distort the sound (a very light color) I use a fender princeton blackface 1966 and I have a Fargen Blackface reverb lexicon 300 and I am surprised at the effectiveness of this pedal.

I use it for 6 months. Convincing.