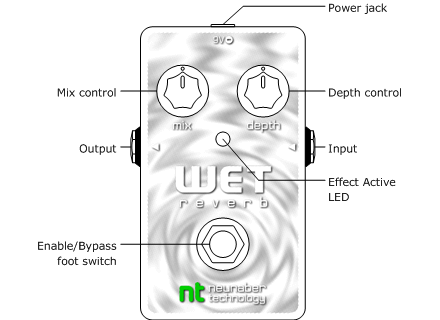 Neunaber Technology Wet Reverb V3
5
Digital reverb pedal. No true bypass, there is a buffer for the trails (explained later). In connection jacks quarter. Two knobs, footswitch (very flexible and discreet, which can be damn valuable) to activate, 9 or 12 volts supply (center negative).

Super basic config: two knobs; for a mix, the other to sustain the effect. With just these two controls you touch a lot of styles, a short reverb and snapping rather focus on reflections in a reverb church where notes intermingle and last, last ... Pushed to 100%, the knob 'Depth' is a kind of freeze (cf. pedal 'Freeze' of EHX) and allows sustain notes reverberated almost infinite. Manuals and online help can refine and enhance the use of the pedal, which is the basis already accessible. The buffer is used to disable the pedal instantly without disabling effect, reverb eventually die while superimposed on the signal without effect (functionality also called 'trails').

The effect is to me a very high quality. I use it with my guitars (Les Paul & Telecaster) on my Fender The Twin (red knobs), it is a delight; contrary to the advice met on the net, I do not find it too bright. She knows how to stay simple, discreet and realistic, or otherwise go to extreme effects, a little more experimental. Very nice for the amateur beautiful reverb Jeff Buckley, Anna Calvi, etc., as well as for surfing rocker, or melted shoegaze.

I use since December 2013, including in my sound design group for large bodies of agreements sometimes worthy of an analog synth. I mainly used the reverb spring before my amps (a Lab Series L9 then Fender The Twin), and although it is not found there the typical grain of spring, I much prefer the versatility and beauty Minutes of the Wet. This is so far the most simple reverb and richer than I have ever tested, I think it will be a good way together! I definitely would do this choice if I had to buy a reverb quality in a range of prices 'boutique'. Her older sister stereo I was also interested in the possibility to influence the tone of the effect, but I prefer the simplicity and the ability to freeze the mono (not included on the stereo).

Other Neunaber Technology reverbs for Guitar