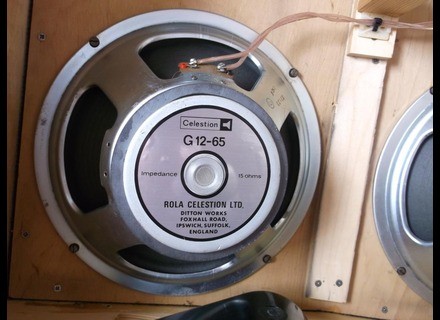 Celestion G12-65 Rola
5
I own a JCM800 cab equipped with g12-65s, and I'm replacing a pair of V30s with two others in a 2x12. This is my personal favorite speaker. It brings a great presence in all circumstabces and acoustic condition, with either one or 3 guitars in the band. Some will find it too "surgical-sounding". It's the exact opposite of a V30: bright-sounding, yet rather smooth, less of a beehive than a v30 or 75. Lows are less protruding and flattering (as it seems...) than with a v30. As a consequence, when the volume gets up, the sound remains accurate. To avoid for metal? Not so sure... If you like old-school heavy, this is a must have. I came across it by chance but always got back to it. Not the most flattering at first, but it turns out to be quite versatile, reliable (a lot of presence and a defined sound in all circumstances). All in all, accurate, and no need for extreme frequencies that blow your head off.

Plus, it really bites, really much, in lead, whether you play clean, crunch or overdriven, but with a balanced sound.

I'm neither a metal or thrash player but had the opportunity to play hard/heavy (it was featured on Marshall cabs in the glorious days of heavy metal), I mostly play rock & blues-rock. With all the heads and combos that were used with it, I consider it doesn't adapt so well to modern or so-called-vintage hi-gain type amps, which generally tend to a low mids, fat (think Rivera/Blackstar/Mesa) register. It doesn't work at all, these amps were thought for V30s or Classic 80s. The same goes with very bright-sounding amps such as Koch or Brunetti: much better but still a bit unbalanced. Must sound quite well with Orange or Marshall amps.

While considered as THE 80s heavy speaker, its regular users (as mentioned by Celestion) are Mike Landau, Robben Ford, Ray Gomez, Lenny Kravitz... And since it takes a lot from the Greenback, if you also like Jimi and Eddie, your ears will have a good time!
Did you find this review helpful?yesno
»