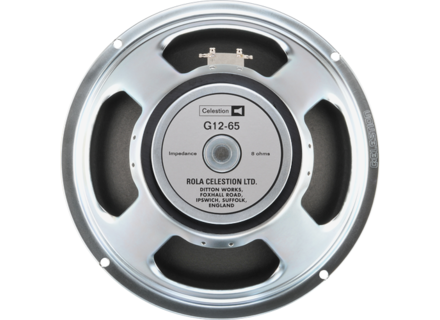 Heritage G12-65, Guitar speaker from Celestion in the Heritage series.

Celestion Heritage G12-65
5
I use them for more than a year on my 4104 Marshall. In terms of sound as I say whenever hp are the tastes and colors of each. However: These hp power level to perfectly match my marshall (50w), I read some reviews that some had upgraded to g ... December 70 It is a degraded for me

For a vintage sound with better than most acute marshall these hp walk thunder (listen to "dirty deeds done dirt cheap" ACDC, the guitar sound is partly due to these hp (the g12 in general, they are adapted to the power amp).

Shortly after my purchase (170 € / piece), I heard proposed by copying improved WGS: the AND 65 (80 € / piece) and does what is roughly the same speaker, actually improved. Mids are slightly more transparent, a little something brighter, more airy. To summarize, Celestion have a dark side and massive than WGS corrected.

I would like to sell the Celestion without really lose financially because, you guessed it, for the price, I did not hesitate to replace them with the WGS.

2 of 11 people found this review helpful

Celestion Heritage G12-65
5
I had two cabins SERIES JCM800 Lead 1960, mounted with the Celestion G12-65 Rola, for years, with 2203 heads. It's not a bad guy, just between the G12M Greenback and G12T75. has more rings than Brilland G12T75, but slightly less than the G12M ractifs (normal). Much like G12T75 it becomes profitable and generous in amount in the towers. He t cr by Celestion Greenback as more powerful. Forget 20Watt amps. He needs a good 100 watts when it is mounted in 4x12.
If you find 50euros price argus announced here at the rdaction of my comment, why not?
I would prfre of the G12M 25WATT, but also because I do not play me like a patient to vibrate the eardrums. The 747 landing in a pice of 15m, cest not my thing. However, to have had the pleasure of my trainer cabins on lpoque scnes grandesapte enough! .. So, you see.

Eяяаtom's review (This content has been automatically translated from French)

Celestion Heritage G12-65
5
Speaker baffles fitted to some Marshall JCM800.
"The G12 65 were changing Famous Rola Greenback 70's. Their greatest power handling gives them particular sounds a little straighter and a spectrum a little more balance than the G12M 25w, what brings them together on the character of G12H these points "

Comparing a 65 to a V30:
The 65 sounds more round, soft, not the side of the honeycomb nest V30. Treble will be reduced, and one side clearly has more roots, with low purring.

I play a mix V30 / g12-65, the last big rock sounds while the V30 seems designed more to metal (tighter and therefore may also be cleaner)

It seems to be closer to the characteristics of a classic 80 ...