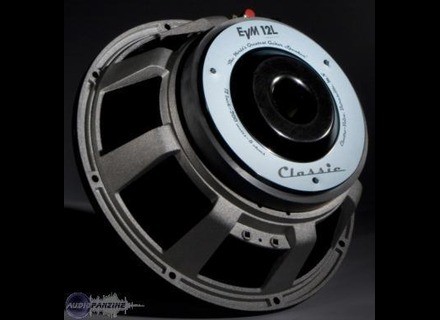 jelly.roll's review (This content has been automatically translated from French)" cream HP"

Electro-Voice EVM12L Classic
5
Used since 1992 to start with rivera RQ212EV with a power amp for effects, my direct sound from a combo M60EV him with a closed cab 112EVM ... (rivera)
I had 4x12 marshall 1960 with 75 years of greenbacks (real and not reissues of pre-rola) ... bin there's no picture, quoted definition and projection. 1 EVM12L sprinkles alone as a 4x12 with definition and more importantly it will be much less prescriptive! No need to stay in line with the speaker to hear as is the case with the 1960 ..!
Since then I have 4 mesa RoadReady thielve years 85/90 in EVM12L more advantageously replacing the stacks (saves space and modularity in terms of places and needs)!
purchased occas € 300 + beast moving terminals 800 to get 1 pairs and 300 for the other pair. Moreover, one of the sellers contacted me to put a statutory option if ever I had to separate myself (he he regretted having sold! balot is that! (I I promised him that I would put it aside in case!

This is happiness except that baffle weighs almost a third of the weight of a 1960!!

That said for those who still doubt! i head on one mesa 5150 thielve closed back in ev immediately calms the most drummers nags and no need to turn up the volume to catch ... 2.5/3.5 to cry poor!

take a look from time to time on gbase.com! there's no longer sold in January 1960 Vai mounted (not Celestion but in EVM 12L)


as what it is not because the mark on the speaker really is the product serial gear that is inside often has nothing to do with the standard!

Electro-Voice EVM12L Classic
5
Installed in a load close to about 50 liters. Driver with a small amp 15W lamps
It grows very strong. Finishes very clean, professional
Graves punchy not intrusive, medium specific living
Treble very clean, not screaming, slamming if desired
We hear music, with the return game, which depends on the guitar, microphones, the game .. In short, super versatile, unless you want distortion that starts with an HP spin.
This makes the music.
Only restriction is any, even if it plays like a pot, do not forgive

Did you find this review helpful?yesno
»
Read the 3 user reviews on the Electro-Voice EVM12L Classic »