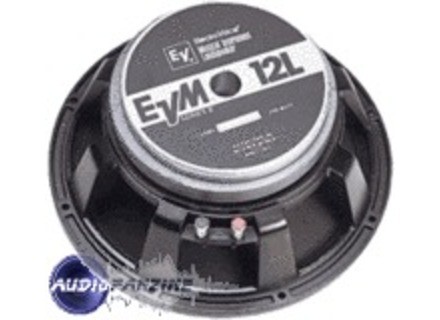 Electro-Voice EVM12L Pro Line
I do not believe that the 16th photo on Page 1 of Images, and the 8th and 9th Photos on Page 2 of Images portray EVM 12L speakers. Instead, they are the generic, OEM versions of the “Force 12” speaker.

The “Force” series of Electro-Voice speakers (offered in 10-, 12-, and 15-inch versions) used the same rugged (cast-aluminum) frames, but have smaller magnet assemblies and were lighter in weight than their more powerful EVM speaker counterparts (10M, 12L, and 15L). The Force speakers handled only up to 150 watts (still powerful), and had somewhat different acoustic properties. In retail form the Force speakers had fancy identifying front dust caps and rear emblems. In OEM form they were unadorned. Both versions usually had the distinctive black cast metal fins on the rear plate.

The original SRO and/or EVM 12L speaker may have been a 300 watt speaker (like the original EVM 10M speaker). The EVM 12L Series II speakers, pictured in most (but not all) of the remaining photos are 200 watt speakers, and usually had either (a) a flat rear plate with an EV factory label (retail version), (b) an aftermarket speaker- (e.g., SLM Electronics) or amp- (e.g., Fender; Mesa Boogie) manufacturer’s label (OEM version), or (c) no label, with or without EV factory stamped information and model/date codes (OEM version). These variations are nicely illustrated among the two pages of Images on this site.

The Force, EVM 12L (in original form), and later EVM 12L Series II speakers are no longer manufactured. Photo 2 on Page 1 of Images is of a current 12L Classic still offered by Electro-Voice.

While I am not an expert, I believe that all these various types of EV speakers are excellent upgrades, when properly matched to appropriate guitar amplifiers. EV speakers are powerful and very rugged. They are, however, heavy and acoustically accurate ("unforgiving," as someone has said).

I can personally vouch for the (OEM) Force 10 and the EVM 12L Series II (called a "12F" on the Fender label) speakers, which were offered as upgrades in certain 1980's Fender Series II tube amplifiers (e.g., the small Super Champ and larger Concert amps; see 3 photos).

Electro-Voice EVM12L Pro Line
5
This is the LEGENDARY and well known EVM 12L speaker. I've had my run through these through different time periods played through different heads and different cabinet wood types and I've got to say these are probably my most favorite speaker. They have a very distinct character to them. One thing is that they are very smooth, and by that I mean there are never any harsh highs, nothing is ever fizzy, fuzzy with the high end. This is especially noticeable to me when playing at low volumes, yes, listen for it! Low volumes, I'm talking practice volumes here. Most speakers need to be juiced up by the amp to produce a smoother overall high end but for some reason this 200 watt EV speaker can deliver at low volumes as well as high end! This I find is great for those heads or amps that are known to be buzzy or harsh (whether at low volume or not) it'll help smoothen out the amp's tone even more.

Another thing I've also noticed is the low end is quite tight and by that, some players may not like it for that reason. Some players like a very sludgy and massive low end bouncing up at you and I understand the feeling but at the end of the day when playing with a band and or gigging, that low end rumble is really only noticeable within 2 feet of the front or your cab anyway. The mic won't pick it up nor will anybody else hear it. I know tone is subjective and I’ve heard some people claim this speaker to be lifeless and dull, that’s probably because the EV speaker has a sort of transparent character. It doesn’t color the amp as much as other speakers tend to do, rather it just clearly represents what’s being put through, and also has more than enough headroom so to not have any fizzy highs. I’d think this is a great speaker for any application especially downtuning type stuff since the low end is very tight. Just ask Zakk Wylde!

So why did I give this a 9 then and not a 10? It’s the weight. It’s way too heavy for a speaker!! Just WAY too heavy! I’m not a big guy and though I’m ok with carrying a regular 412 most of the time, I had a lot of trouble just carrying an avatar 212 loaded with 2 of these EVs!! I couldn’t imagine what it’d be like with a 412 loaded with these monsters!!!

Electro-Voice EVM12L Pro Line
5
I finally decided to give an opinion on the HP after trying in many different configurations.

I use it for about two years, but I had already met in the past, without knowing it was him (on an old brand combo Acoustic).

The characteristic I like most is its perfect definition in all frequencies (at least those with a guitarist), its accuracy, its low and low mids.
If you are tired of the side, albeit biting, but the Celestion loud, try it.

It is said particularly suitable for clear sound. True, but it is also ideal for saturation. Two examples: On my old JCM800 I installed a Celestion Alnico Gold and it's great (one bite and aggression!) And then to see, I added a 2X12 closed (on the model of Mesa Boogie) by Electrovoice. By Jove! my combo ended up with big bollocks like that! I have never had such a good sound in 25 years of experience and stage. So I offended my tests, I was ready an old Orange OR120 head: a baffle mounted 4X12 Marshall Celestion greenback was hairy, but a little too loud and aggressive. I was going to the amp, a little disappointed. Great idea, I plug the speaker cited 2X12. O miracle, never heard a sound as thick, I felt like taking a kick in the ass every time I swung a power chord, and yet I do not like kicking ass! Enjoyable.
I could multiply examples of his clear, crunch, saturated, but it's useless. Electrovoice I ride now, and you do as you please.
Its only drawback is the weight, it must weigh 7 or 8 pounds. Think about it before installing it in an already heavy combo.

I bought mine secondhand for about 150 euros. Yes I do it again this election and I have already done because I just get me an old pair again (like Dad). What makes me four (not like Dad).

Electro-Voice EVM12L Pro Line
5
J have this mounted close hp in a load of about 50 liters, old Cabasse Sampan.
I fed the tube amp with a 15W Laney. The result is impressive: super clean bass but not at all invasive and neither soft nor cartoners or round, a medium neutral, expressive, not cold, uncolored treble neither too hot nor noisy, very linear and simply beautiful. Extra punch. My modest 15W stir the hp without any difficulties. With over break I think it will be even better.
J also have a Line6 8 'and a Jensen 10 "the difference is huge.
I haven t an open-back but it is widely distributed. With a single baffle hp weighs 24kg! This does not flinch.
In short, c is much more versatile than the Celestion or Eminence hp, hyper typed: creamy, American, English, marketing or other arguments.
With the EVM 12 means the amp and guitar, is c. With guitars, different pickups, different games, the HP restored the differences. Therefore, if we play "evil" it s fit, this is not a fault.
Some find this HP a little pricey, but so versatile, so we can send power.

Did you find this review helpful?yesno
»
Read the 7 user reviews on the Electro-Voice EVM12L Pro Line »