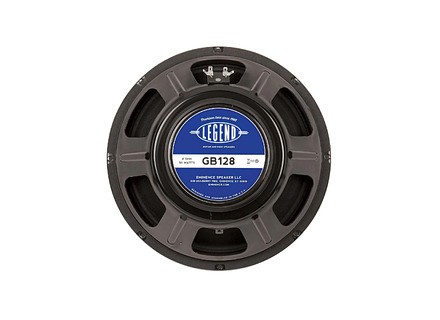 Legend GB128, Guitar speaker from Eminence in the Legend series.

papifouine's review (This content has been automatically translated from French)" Potato"

Eminence Legend GB128
5
This speaker is excellent both for clear sounds that saturated with high efficiency. It replaces a Bugera (which is not bad) but gives more character to my V 22 Perfect for the blues.

Mikka Grytviken's review (This content has been automatically translated from French)" Vintage British and Rock 'n Roll at will."

Eminence Legend GB128
5
After months of intensive use I notice very positive of this excellent speaker for guitar. I have a good collection of hp, a Tonespotter, a Red White and Blues, a pair of Greenback G12M-20 NOS, a Celestion VX12, of Eminence Blue Marvel and Custom ... and I had the opportunity to test the V30, the Governor, an Eminence Legend 12 "Alnico, a Celestion Super 65, Celestion Alnico Blue, G12M-25, G12-65 ... so I have a pretty good crop the hp.
I climbed into my Fellow 13 (a pp EL84 class A possessing a reaction against the spirit and preamp Marshall JTM / JMP) it fits perfectly together, a Marshall Plexi beautiful grain of the old school, the kind of thing that barks well in the midrange, creamy and sweet and well saturated by his slamming clear.
I find it a bit more midrange and it would be a more aggressive chouilla a Celestion Greenback. That said a G12M alone in a combo or open back cab in do not usually behave very well, it tends to sound "arsh" while in this configuration the Legend GB12 does not exhibit this kind of defects and thus restrict doing rather better.
In short I am telling, excellent hp perfect for low power amps british mind thanks to its high efficiency. Are a clear prickling well in the high mids which makes it nice for the same country, a crispy crunch and a good general behavior in the low distortion thanks to well-balanced. For the price you can hardly find anything better.

SlapKid's review (This content has been automatically translated from French)" From the look!"

High sensitivity, the amp sounds very hard with. The highs are there but rather gentle, kind jensen alnico lapped. The bass are there too, not too dominant, and cashing out the setting of the amp in the bass.
The mids are very present, even when well ventilated, and very crisp with a grain with a little sweetness that will never celestion (I hate them for that matter, except the green).
In summary this is a super hp breathing without whistling (not asthmatic!) And when you push the volume it gets warmer and a bit better I would say.
It brightens dull though an amp, distortion and rendering is a delight.
I like short, but special attention is the same, it would be best to try ...
Eminence is strong for the price of course, but also for their site that offers support section in the sound clips for almost every guitar hp, with GB12. These videos were made with a boss rc2 (for no change game guitar) and whenever three sounds, it's great and I can attest to the veracity of the results (based on other HP I eminence and appear in the clips).
With all that hard to go wrong, so a big fat 10 for perfect!