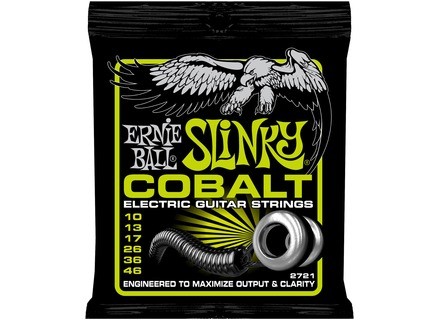 Ernie Ball Cobalt Electric Slinky
4
I recently had my guitar professionally set up and asked for the new (ish) Ernie Ball Cobalt strings. I have been playing the standard Ernie Ball regular slinky strings for over 10 years. I have typically played .10s, however I had a specific project that I have been working on where I was tuning my guitar to standard D instead of standard E. Therefore, I wanted to step up to .11s instead of .10s. I have about twenty sets of the Ernie Ball .10s at home, so I wasn't interested in trying out the Cobalt strings until I used up all these strings first. However, because of this new project, I decided I would try them out for the time being.
My initial impression was that they sound the same as a fresh set of the standard Ernie Ball strings. I didn't hear that the 'Cobalt' and extra $$$ was making any different. This was a little disappointing because I would have hoped that the strings would sound better in general when you first put them on fresh. The second test was whether they hold their tone for longer. I have been playing them for about a week, and it is hard to tell if they have really been able to hold their tone longer.
The one thing that I do notice, is that they are easier to clean than the standard Ernie Ball strings. Any dirt or grime from my fingers that gets left on the strings comes off pretty easily. This definitely helps the tone last longer in the strings, because it helps the strings vibrate more smoothly. I try to clean my strings after every time I play. Anyone that plays guitar knows, after a while, it doesn't matter how much you try to clean your strings, the dirts not coming off and it is just easier to put a new set on. I am hoping that these strings last a little bit longer to make the extra $$$ worth it. Otherwise I will probably just stick with the cheaper strings.
Did you find this review helpful?yesno
»

Ernie Ball Cobalt Electric Slinky
5
I've used Daddario's for 8 years, just recently switching to daddario coated. I've gone through damn near every brand I can think of and always gone back to daddario. When these cobalts came out I decided to give them a try. My concerns were longevity and tone. They're brighter than most strings and rougher like daddario's so that was a plus. I've had a pair on my Jackson Rhoads for about 3 months now, just to see how they last. They still sound like new, haven't rusted or corroded at all, and feel great. The whole line of them being louder and more definition I think is BS. Even if they were louder with the type of pickups, distance from pickups, amp, amp settings... you'd never know it was the strings, no matter how much louder they were (which they are still negligible.
So I think these are great strings and could possibly make me switch from Daddario but I'll have to test them a little more. They cost about the same as coated strings so money isn't an issue.

Joe-Rhys's review (This content has been automatically translated from French)" expensive ..."

Ernie Ball Cobalt Electric Slinky
4
I bought them today and I tried a lot ...
at first, the strings are less rough than standard models, they sound more "dark" ....
after, then to say that they last so-called 3 times longer than the base models .... um, have to see in time ....
what I like most or least; I think these strings are expensive for the arguments they advance, because, even if it is the case that they last longer and they are treated with cobalt, I think it is a selling point to justify € 14 (double base models!) for the purchase of these strings; that are not savarez either!
after, I must make myself sound of these new strings ...
the price / quality ratio is, for me, a little truncated by the price that I find expensive.
for now, this is just my first impression, I'll see later how they react to oxidation, physical treatment I inflict their ...
but I just wanted to try them, because I do not play exclusively on ernieball strings (I wish they'd sponsor me ... ah ah).
ultimately ropes a little different from the issue and inexpensive standard models; after, if they last longer, I ascend the note ...

Dr.Bob's review (This content has been automatically translated from French)" Do not buy"

Ernie Ball Cobalt Electric Slinky
After buying a beautiful Stratocaster Mark Knopfler I got this offer rope game by the seller because the original game was 09.
I replace the game, and then surprise it sounded dull, cardboard with a touch very dry.
Compared to the price that these strings cost it's still weird and I started to doubt the purchase of my guitar!. I turned this game rope then reassembled the dadario exl 110 010/046 and there miracle it sounded like it should sound.
So either there was a problem with this set of strings or they are made to a well-defined style, but to play (country rock and roll blues) in clean no interest.
Good distrust us it has been 30 years since I scratch and maybe I'm a little limited by habit but for me it is not.
Tastes and colors but it takes a minimum of color.

Did you find this review helpful?yesno
»
Read the 7 user reviews on the Ernie Ball Cobalt Electric Slinky »