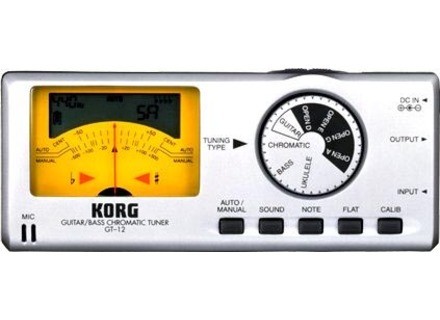 Korg GT12
5
I bought this unit at Dirk Witten in Amsterdam for around 80 (that's more in dollars, at the time). The store is nice by the way

I want a tuner with an analog display, because that's easy to read and is much more precise. Also, it "motivates" you to tune just right, while with slow LCD-displays, you tend to "aww just about right"
Also, you get a lot of tuning options in a easy to control disc of some sorts. The tuner also has a AC-input and a Input & Output, so you can plug it into your (future) pedalboard. AND the greatest thing.....you can tune a ukulele! WOOOHOOO!!!

Well, it's fucking expensive, but hey, I wanted a analog display so they start at 80 and up, and also I buy gear thinking that I will still be using it for 5 years or longer.

Pretty good, no problems yet. It is probably not suited for kicking around and stepping on, but you can probably drop it once, maybe.

I always had bad things with tuners and was alwaysirritated by the way they work, but this one has been really nice and performs great. But still, try not to depend to much on tuners, keep training your own ear.

I had a cheap led tuner. This GT12 has a mechanical meter movement, which is way better. Its flanked by sharp/flat leds, but the meter makes tuning more accurate, and means that you can use this unit to check/adjust intonation. Its not as accurate as a guitar shop would use, but its ok for the do-it-yourselfer. It also can be put in manual mode, if you are wanting to zero in on a particular string, but for plain tuning, auto mode works well. Its plenty sensitive and grabs notes quick with very little falsing. This thing also features several alternative tunings pre-programmed, and some other instruments as well.

In manual mode, to select notes you must step thru them 1 at a time with a single button. If you go past, keep going til you come back. It would be nice to have the notes on the rotary dial so you could go straight to them. This is not a big deal tho.

As soundly constructed as plastic gadgets can be, I guess. It has a switchable backlight that works well.

I am very happy with this thing.